Wow, nobody is talking about Tough Enough! Here’s a review of the little engine that could, but probably shouldn’t, but is anyway.

Review of the Competition Special here 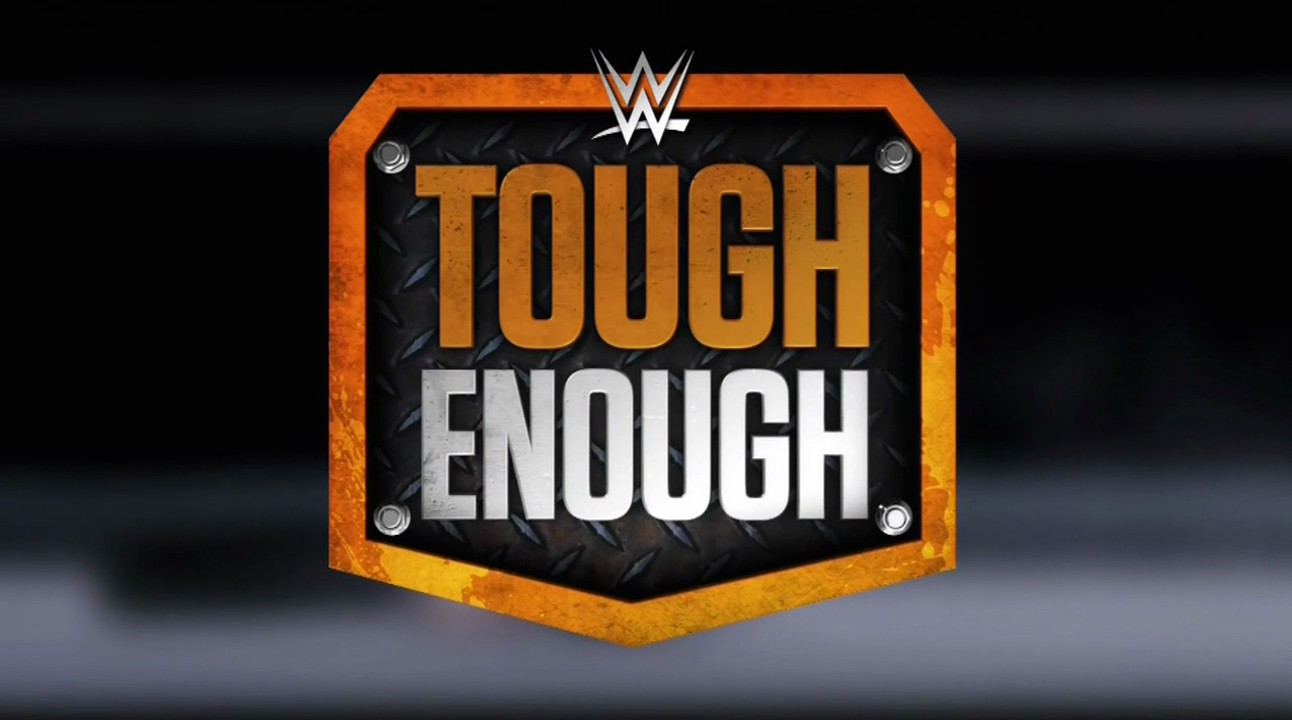 • The première of Season 6 of Tough Enough! Originally going to be a Network exclusive, WWE managed to get a deal with USA Network. It’ll be free on either WWE.com or YouTube soon for countries without a TV deal. Austin was supposed to be the host, but the repeated delays caused him to drop out of the project (hence Chris Jericho instead). Taped at Full Sail University Studios (i.e. the same media university where they tape NXT), the live portion is shot in a condensed American idol setup; smattering of fans around the host area, which is a ring with a long desk on it, facing the titantron where the contestants are standing.
• The show is set up like the finale of S1 of Tough Enough: judges and contestants in the building live, but most of the show is pre-recorded, highly-edited footage from the past week. The judges are Daniel Bryan, Paige and Hulk Hogan; which are great choices; DB being the younger veteran, Paige being a more sincere/honest & most prominent Diva and Hogan being the hot-dogging old coot.
• The show ended up doing a 0.87 (1.2m viewers) which is about ONE THIRD of what last season’s première did, and below USA Network’s 1.5m average. So this is the “boy” of WWE TV shows! News credit: PiledriverWrestling.net
• Only about 15 minutes (of the 41) of the show is live: the hello and rules at the start, a HIGHLY OBNOXIOUS 1 minute 21 second clapping segment (I shit you not) and the end where they reveal the final three, stall for time to allow voting, and send one packing.
• A small point but the rules are poorly written! The first sentence ends with “each week” and the second sentence starts with “each week”. Convoluted explanation where the judges choose their bottom three and the least-voted for gets eliminated. Judges have one “save” per season but are asked before hearing the results, so their save could be thrown away. So let’s get to it!

• They go through the contestants, expecting you to have already watched the Competition Special (which would’ve made for a much better 1st episode)
• Always interesting to see how WWE edit the footage to show the story they want to tell – they earmark Dianna for failure as they nab a sound clip of her already complaining (“ugh, great”) about a challenge and cut to her clucking about her fiancé. Later she gets heel heat as although she says she’s hurting, she does the best stamina drills out of the women, then sneaks off to see her fiancée and gets into an argument with the Brazilian Gabi. In the live element she complains about how the editing portrayed her.
• Physical drills at the Citrus Bowl in Orlando (site of WM24). Massive blurring, it’s like 2002 all over again, likely didn’t want to give free advertising or plug the soccer team Orlando City.
• The house they’re staying in is called “the barracks”, a basic military-style digs, not flashy like previous years. It looks pretty ghetto, but it’s different for WWE, who always want to look lavish.
• ZZ’s 18 and can’t drink, so gets in the hot-tub with Patrick instead. He makes an analogy of it being like soup. If it has only meat, it’s a stew. Amazing.
• The main story is how 4 bigger guys get jealous of MMA guy Tanner, who smoked them physically in the first drill. They come off like douchebags. There’s a great little storyline of cocky Tanner saying he can do double of what the other guys do. Patrick blows up about it (which seemed very rehearsed, much like the 4 lads getting together to bitch about Tanner). The men’s average is for drills was 8, and Tanner does 16. Suck it, everyone else!
• In the live elimination portion (3 men, i.e. gender-neutral eliminations) ZZ’s called out for being unfit. Since it’s a weekly evaluation it’s a tall order for him to get up to scratch in such a short time, hopefully he won’t get bumped in a few weeks, he’s the best contestant there. I initially thought Paige was calling out Sarah Lee (who had the least amount of screen-time of anyone – which could mean getting eliminated, or perhaps the Maven-type deal where she’s a front runner, and won’t be featured until later on in the Season) but Paige calls out the completely forgettable Joshua, who evades being cut. Hank completely ducks the “he’s the worst…including the women” suffix he made out ZZ being physically unfit. I think just Paige asking the question, and the shifty response so close to voting really hurt him, and ended up getting him eliminated. He could’ve said he meant since there are two separate contracts (one male/one female) to win but he’s the overall worst. Daria said something about risk, and the whole thing wasn’t very good at all.

Overall, the most likeable person on the show is Daniel Bryan, by a wide margin! Then ZZ, and that’s about it. Feels like a soulless contestant show, not a lot of personality, but it’s early days, and I’m still happy to watch it. This live element is new but overall it’s the same mindset they’ve always had with Tough Enough, for better and worse. I hope one time they’ll only get indy wrestlers, it’d be amazing. So it’s like True Detective Season 2, not looking great but I’ll watch the next few and see how it pans out. If you can’t be arsed watching the show, I got ya covered.

Review of the Competition Special I posted earlier today!
Latest update on the next OSW Review!
Super OSW 64 returns this Saturday!

Cool update, Shotzi (aka Ashley, the electric red-haired model/wrestler who had to withdraw) commented about her time on our facebook page! Here’s what she wrote: 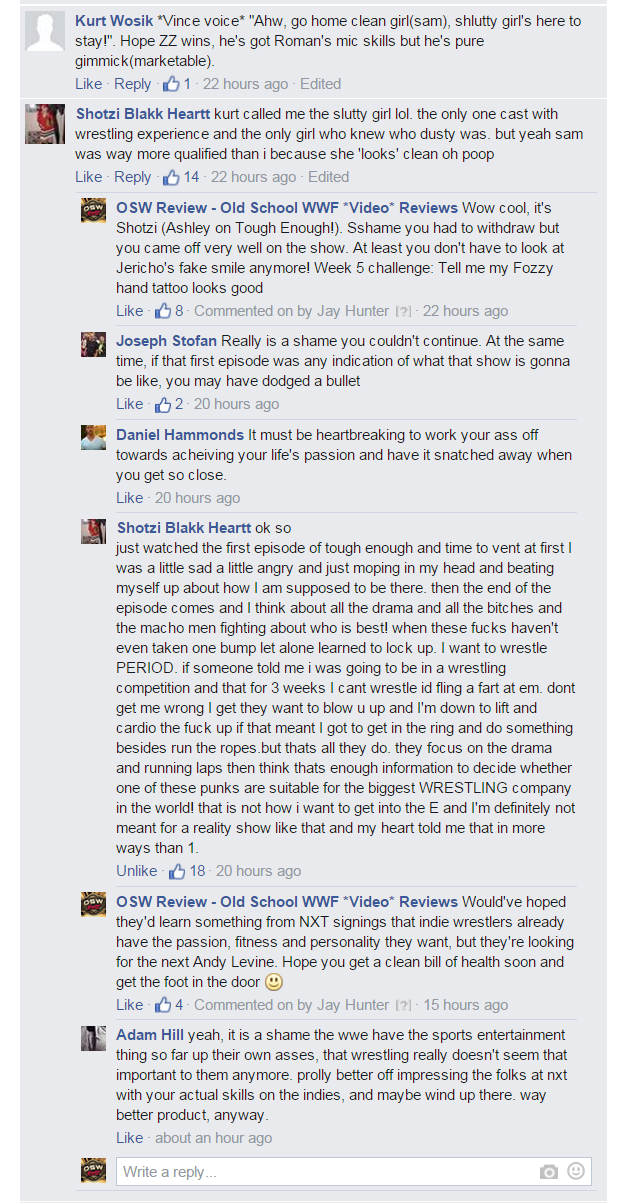