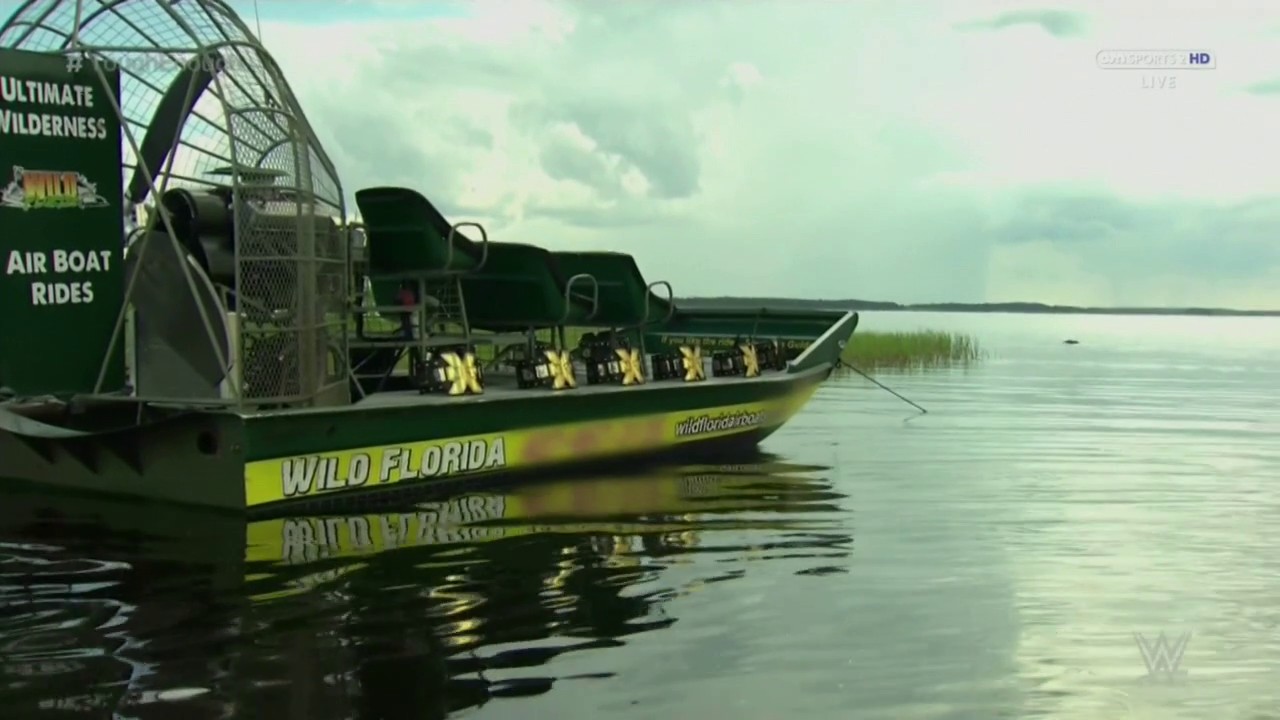 Massive drop in interest around the net about Tough Enough after the premiere. Can’t blame ’em! The show averaged 1,047,000 viewers (losing 162,000 from last week, which isn’t that bad!). USA now also have a 2-hour version of RAW as a lead in.

• The format of the show is Jericho/Renee Young and the judges (Bryan, Paige & Hogan) in front of a live studio in Full Sail University, cutting to pre-recorded footage from the week’s events. Then they trot out the contestants, prod them about whatever they find most interesting, and eliminate one of them via popular vote. I also watched last week’s Tough Talk, which is an informal half hour chat by Miz, talking to the contestants and the judges butting in. It’s actually better than Tough Enough!
• Where are Jericho’s eyebrows? I know you’re 45 but grow old gracefully! Botox in men is never cool. It’s like Buff Bagwell getting calf implants!
• The Judges admit that these 13 are the best of the 11,000 submissions & most have blended into the background. Oh jaysus!
• Really forced drama this week. It kicks off with women shouting at each other, Patrick (the black guy) cutting a promo on Alex, and later Daria crying.
• Patrick chastises Alex over knowing nothing about wrestling. Alex outs himself by saying “I don’t need to know anything about history. Knowledge means nothing”. Oddly they never showcase Patrick’s knowledge, even a little bit. Right there sealed his fate – as it’s also an insult to wrestling fans.
• Courage Challenge 1 at The Swamp: In “crocodile infested waters”, swim to the boat, retrieve a NXT title and return back. I only saw one croc, it was very far away and could’ve been fake! This is ZZ’s environment but he’s not a good swimmer. Dianna (former swim team in high school) absolutely blitzes everyone for the win, whilst Tanner decides to cheat by swimming to the land and running around to beat the other guys.
• Dianna says “Lake Placid ruined me for life” – dammit Jimmy king!
• Billy Gunn chews out Daria (the lesbian MMA bartender) for dropping her title in the swamp and she starts bawling. Seems REALLY fake. Boo!
• Courage Challenge 2: At the training centre, there’s Roman Reigns and his baby blue contact lenses! There’s just something wrong with a guy who got a spot in FCW thanks to his dad and was fast-tracked to the main roster and main event giving advice to trainees. I’d MUCH rather grizzled veterans, like Funlee or Regal. Unlike S1 of Tough Enough, their guests don’t spend a few minutes talking about themselves, which was a highlight of the show. I would’ve liked to have heard Roman speak, after all he did ‘overcome not knowing’! Roman’s task: take Bull Dempsy’s finish (giant whoopsie from the top rope). Em…nothing comes of this, they’re all asked to take a back bump off the top rope instead. Patrick does the best (Billy quips ‘good job Barry Horowitz!’) and Dianna has the worst.
• Next episode I need to count the number of times they start clapping. It’s so phony and desperate, it lasts an ice age.
• Back at the camp, there’s lots of women shouting over each other calling each other bitches. Russo would be proud!
• It doesn’t help that this show has a horrendous soundtrack, a bland synth pop music that’s immediately forgettable; Vince saying ‘it’s trash, but sure this is what the idiot kids like these days’.
• Elimination Time! Bottom 3: Alex “I don’t need to know about wrestling”, Dianna (despite winning the first challenge is always arguing, so ‘doesn’t have locker-room etiquette’) and Sara Lee. No, not Sara Lee! I like what I’ve seen in the 10 seconds she’s had on camera. Her final plea is saying she won’t start fights to get on camera, and to give her a go. Was happily surprised to see she got 50% of the votes, and with only 15%, Alex gets the hoof.

Overall, this this not a good show! Their big star (ZZ) isn’t good at wrestling or has cardio but seems like a lovely dude; wasn’t featured much here. I wonder if USA are regretting picking up this show, and if the deal was made before Austin pulled out. 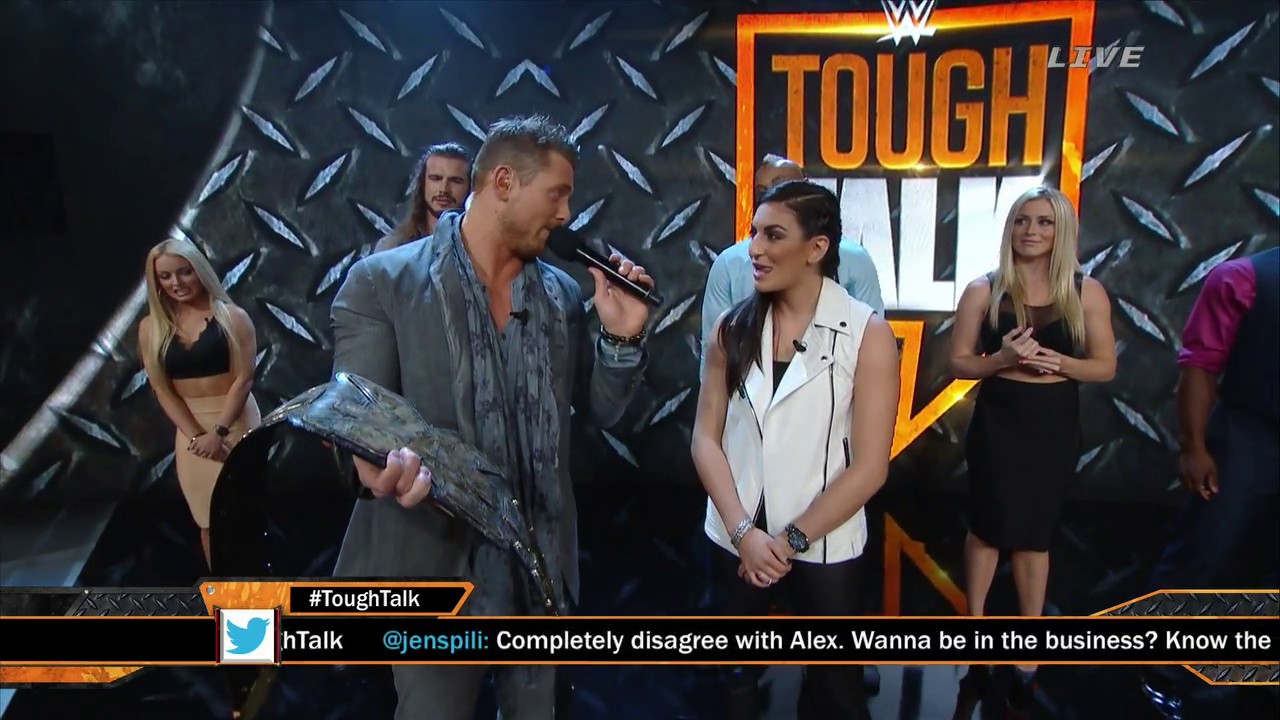 • The Miz (Y2J calls him Jericho Jr.) is a FAR better host than Jericho. He’s also less overbearing than last week so he’s actually really good.
• He mentions being thrown out of the locker-room and changing in the corridor over disrespect. It’s either attributed to no-one (or JBL) but it was actually Benoit that threw him out.
• It’s main plus is that it’s unscripted, and Miz does a great job bouncing off and reacting to the contestants and judges.
• The judges tear into Alex, who doesn’t explain himself well. They end up telling him he needs to try to learn when he gets in the door.
• Paige is coming off as quite boorish and vindictive, jutting in with whatever to amuse herself and work the crowd. Maybe it’s that she’s 22 and been on the main roster for just over a year but I find her quite obnoxious as a judge. Every time she shouts ‘this is my house’ on TV it’s go-away heat.
• Bryan’s such a lovely guy. He’s the best. Everyone loves Daniel. He applauds Alex & Patrick for going in the water without being able to swim, as he can’t swim and wouldn’t want to be in their position. (Paige admits she can’t swim, and Hogan kinda agrees; which has to be bollocks – he’s all about dog-paddling past the buoys!) How come wrestlers can’t swim?
• Daria (who dropped her NXT belt in the pond during the competition) is chastised over not retrieving it from a coloured, murky, infested water that she doesn’t love the business and all that. Hogan twisting it into a respect thing will kill her.
• ZZ is asked about pie, and he says women are like pie, they are hot but when they’re cool they are sweet, and gets a round of applause.
• Gabi (the gorgeous Brazilian) is pressed about her line on Tough Enough, saying Roman Reigns makes her wet. They then jab her husband in the crowd (Bryan asks and find out it’s her 3rd marriage, to this MUCH OLDER man) but he lovingly says he trusts her and they’re committed to her success. Paige says he doesn’t wear the pants in the family.
• Oddly, they repeat the scrolling tweets at the bottom – I hope it’s laziness rather than only 30 people tweeting about Tough Enough!
• The show is actually 30 minutes long (no ads) which does drag in the final 7 minutes.

Overall: Miz & Bryan are really holding up this show. That’s about it. I’ll be back next week to review episode 3! Are you still watching Tough Enough? Tomorrow I’ll give my thoughts on the Tokyo Japan show 🙂

WWE Beast In The East