TOUGH ENOUGH WEEK 5
• Tried to watch it on YouTube live, it was stuck on the “please wait” screen – gave up after 10 minutes. It was available in full today though, as is Tough Talk (no longer a Network exclusive).
• It’s an hour long again – USA Network must’ve given them a permanent extra half hour. There’s actually only 40 minutes of WWE content so it’s better paced now.
• Big show greets Jericho with a Jerishow reference. He stands there silently in his ring gear like a spare tit, as everyone else is dressed in street clothes or more formal attire.
• Challenge 1: “Rock on” adventure obstacle course. Tanner smokes everyone (back to the earlier status quo) and Giorgia (Gigi) wins for the female. Technically Tanner cheated by not using the 1st rope. The 2nd rope climb is the most difficult. To power through, Mada goes into “Mada mode”, which is “1,000 times beast mode”, but 30% of Brie mode. This contest was about specific types of strength, stopping a lot of the challengers. I can only imagine if they asked Big Show (in any year of his wrestling career) to do this, or Dusty Rhodes, and sent him packing. ZZ, Chelsea and Amanda are stymied by the rope climb and Chelsea ends up straining her ankle – she needs to be off it for a month.
• Patrick is being put over as arrogant and can’t back it up. He cuts a smark promo picking on ZZ. It comes off really badly. I’ve no doubt WWE is portraying him much worse than he was via the editing, and Patrick quickly mentions that later.
• We see Jericho “periscoping” the show live (broadcasting video live from his phone) which I did tune into for a bit last night – he holds his camera vertically and generally just shows the audience whilst the pre-recorded clips play on the big screen.
• Gigi, in Gabi’s absence, has taken the role of top female heel – later her and sidekick Amanda pick on Sara lee and the lads literally sit back watching and eating popcorn. It’s the funniest thing Tanner’s done, have a laugh watching the girls cluck. Gigi volunteers Chelsea’s injury status to the judges and fake cries while she does it, turning attention to herself. She comes across as vindictive bitch. She technically is right though (the best kind of heel) – Chelsea should quit rather than being forced out or possibly injuring someone. We find out later that Chelsea’s cleared and can compete again next week.

• Challenge 2: Perform a wrestling sequence of shoulder tackle, jump over and body slam; talking smack whilst you do it. Pair up and the loser does squats whilst reciting some insulting phrase. Mada wins (making Patrick squat and say “I’m bowing down to my king”) and Gigi for the girls (surprisingly, as they slam they showed was horrific). They’ve successfully taken ZZ and Patrick down a few pegs and shifted focus to Mada, a smart change to freshen things up in the overall storyline. He has not got the personality or the cardio to lead the pack though, that’ll blow up soon enough.
• Welllllll, what is Big Show here to do? A live “challenge” for the men to take a chop to the chest. Awesome, everyone has great craic. It’s like being at Ribera steakhouse! Was the perfect use of Show, and it’s his signature spot. He takes a shine to Mada hyping him up for the chop, who takes it like a boss. ZZ (who kept his undershirt on and Giant ripped it off – I hope it wasn’t his dad’s shirt)…he looked like he was shot by a cannon, crumpling afterwards. If I were Sara Lee I would’ve gotten up there to get a chop, it would’ve put her over huge and the other two women have implants so they literally couldn’t. 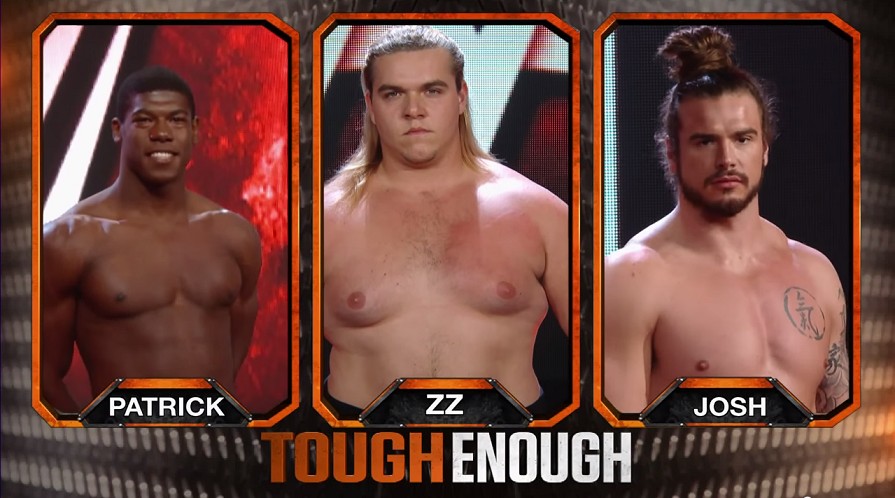 • Bottom 3: ZZ (Via Bryan – God help the other two), Patrick (Paige; for failing a “humility challenge”? That is bullshit, as the challenges were an obstacle course and a smack-talk sequence) and Josh (Hulk – who believes he’s good and can step up if he survives.) Paige rightly quips why not Amanda, who didn’t even finish the challenge…What a hypocrite, take your own advice instead of vindictively ‘humbling’ Patrick to get your jollies.
• Elimination: Poor Josh. Oh fuck! It’s Patrick. The crowd are shocked and give him a round of applause (not given to any other loser) He bottomed out by about 10% – it was definitely the berating of ZZ that killed him. He cuts a grateful “I’ll get humble and be back” promo and we’re done. This was Patrick’s highest chance of getting him eliminated – there was no final challenge and the impromptu 15-second plea was right before voting closed. The episode centred around how he’d gotten a big head, dismissing ZZ asking him to dial it back, and instead attacking the fan-favourite. It worked, Patrick (the only guy who knows his shit, the best all rounder, who knows what to say and the guy who desperately wants to be in WWE) was voted out. Thanks Paige.

Overall: Decent episode (relative to this season of course!), it was nice to see middle-of-the-pack Mada get some shine. Shocked/saddened to see Patrick gone, by far the biggest elimination. Watch Big show’s chops (above), that’s it.

TOUGH TALK
• Digital Extras: ZZ does a horrific scripted promo with Jericho “I feel like I’ve had a reality check”. Oh man. Y2J gives Patrick a pep talk. He mentions one week you’re world champion and next week you’re not on the show (indirectly mentioning his 2002 Undisputed champion run – he wrestled RAW the night after he lost the belt at WMX8, wasn’t at the next PPV and didn’t have a match on RAW until August)
• Patrick correctly mentions that Miz didn’t win TE (S2, and look at him now), Bryan and Paige didn’t start off in WWE either; and later thanks Vince & Aitch, quoting Vince saying we’re a family. Perfect rhetoric! He deserves a job in WWE. Miz mentions it’s the first time people actually care about who got eliminated. More than half of the show is dedicated to Patrick, wow, it goes on a bit too long.
• Bryan laments not being able to save both ZZ and Patrick. Tanner’s grilled about his lack of promos and is told to watch more tapes. Bryan humbly says to not watch his as they’re not that good. What a lovely guy.
• Mada is incredibly timid on the mic (but is it live TV & put on the spot), needing prodding to answer Miz’s questions. Miz picks up on it and challenges him to cut a promo on him, but he doesn’t, and Miz lets him away with it.
• It’s not news but it was really bad this week, Hogan ONLY talks in generic marketing buzzwords “ya gotta turn it up, kick the afterburners on” etc, which is not helpful advice. It’s like a football manager screaming at his team to score more.
• They eek out of Amanda that Chelsea should’ve been in the bottom 3. She should’ve mentioned Chelsea couldn’t even compete in the second challenge, and it’s a week-by-week elimination, so yes. She does admit that she failed it which is good humility with no consequences (since the elimination already happened).
• The women’s angle is Sara calling Gigi fake, for giving up Chelsea’s injury straight away to the judges (and betraying what she expected to be confidential information). Gigi tries to not be the heel (being exasperated that Sara’s forgiven immediately because she’s Sara). Bryan asks who the crowd like more and Sara gets a rousing chant. Do not fuck with Sara Lee! I think she might even top ZZ as top babyface right now. Despite losing all the challenges everyone’s pulling for her. On Tough Talk, Gigi comes off as frustrated, a bit resentful, but straight-laced – what she’s saying is fair. She talks in facts rather than entertainment or personality and is visibly annoyed by Sara Lee’s popularity.
• Miz asks Patrick for a final question (“what’s the next step?”) and he says use the contacts he’s made here, get into the performance centre, he can be bigger than the Miz ever was (what a great guy). This show makes me like Miz so much more. He’s very professional, entertaining whilst still towing the company line (eg mentioning the Performance Centre) and showing his worth.

Overall: The show ran a bit long with the focus on Patrick, but it was entertaining. I’d watch the opening 5 minutes and when Gigi tries to criticise Sara Lee and the crowd shouts her down. There’s never a need to watch either though! I got ya covered 🙂