OSW Review | Legend of Zelda: Breath of the Wild Review

Legend of Zelda: Breath of the Wild Review 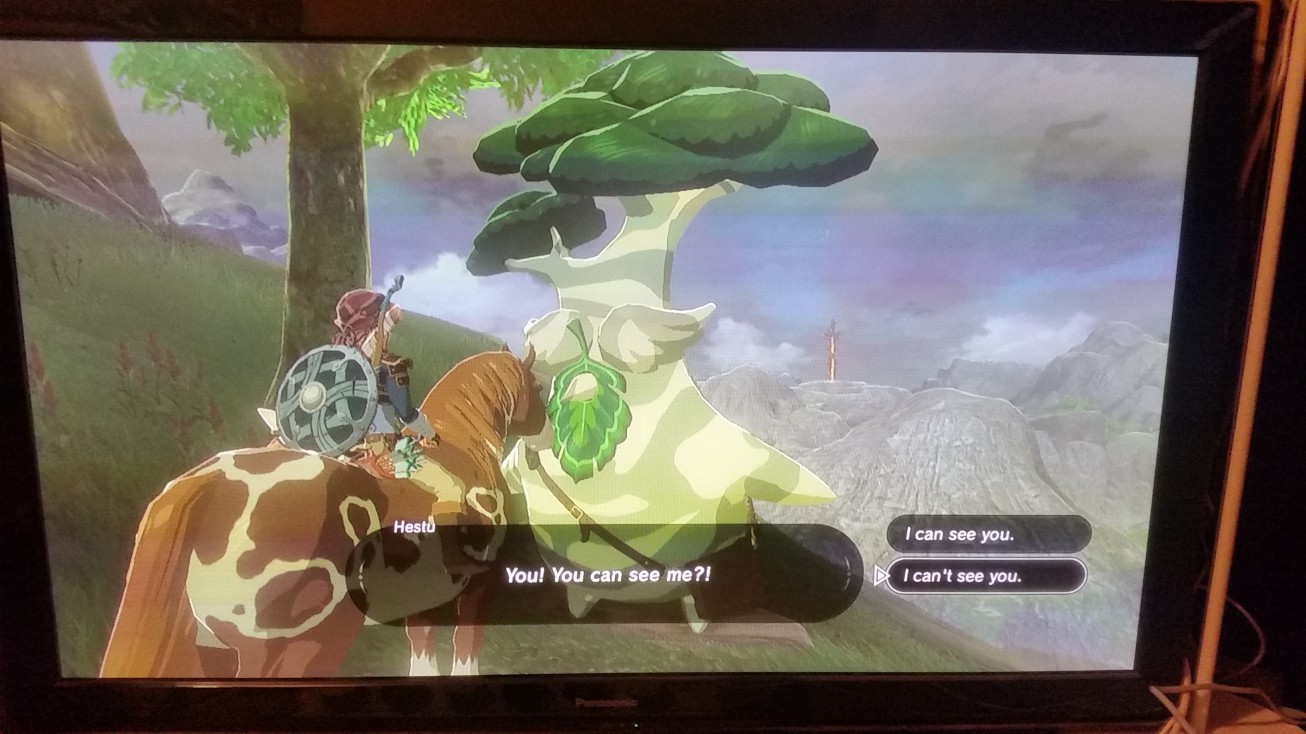 Hey guys! I’m halfway through BOTW, here’s my thoughts so far:
• I’m enjoying it a lot! It’s difficult tearing myself away from the game. I love Zelda so much.
• Open world is so much fun to explore – get to a high place, and you can see so far in every direction, and you can not the towers to get to. That’s bad ass. Just an EPIC scale – you feel so small, and it’s beautifully laid out (but also guides you to the next thing) but feels like you can go anywhere (but maybe not go inside). I love that you can climb mountains and if you had enough stamina, scale the whole thing! Just brute force it! I did this method to get to Zora’s domain.
• The trade off of Open World is it hurts the storyline (makes it v. loose). At the moment it’s better than Skyward Sword, but worse than WindWaker & TP. I LOVE that they don’t have a Na’vi or other companion hounding you.
• WiiU’s running at 720p, lots of jaggies which take a little while to forget about. Switch is running at 900p docked. Gorgeous art-style, which is the main thing. I noted the same thing playing Skyward Sword, it’ll look so much better when running on an emulator (or “HD version” in a few years’ time ala WW & TP) I don’t mind the graphical slowdown when there’s lots of stuff happening on screen, but it is noticeable.
• UI could use some tweaking! I’ve never said that about a Zelda game before. Still having difficulty getting used to the controls and options e.g. you can’t switch to your shield if you’re holding a 2-handed sword open – you’ve to put it away first. Quest objectives, which you can add to the map, is in a different menu to the map. Boo!
• No use of WiiU controller screen (beyond shifting the entire screen over) – would’ve LOVED to put the HUD on the controller screen, so you can enjoy the beauty of the land itself.
• Moblins can kill you, oh shit! I got jobbed out by a couple of blue ones, despite setting off an explosive barrel. I had to engage in swordplay or just run away. I’ve seen the “you died” screen more often than any other Zelda game. Thankfully you’re restarted never more than a few minutes away, and you actually get some helpful items after big events.
• Soundtrack is more of a soundscape, sparse piano (and sometimes orchestra). ‘Songs’ only really happen when you’re in villages or boss fights. I consider Zelda to be THE BEST music franchise of all time — so with barely any actual songs, this is wildly disappointing. It fits the open world areas though; it’s just reserved and quiet, and not stirring and adventurous for the most part. And the main track (from the trailer) is missing from the Soundtrack CD! Most of the music is just incidental but in this article I’ve included two of the v best tracks – Love this bossfight (so much grandeur!)

• Shrines, puzzle areas (to net an orb used to get hearts or stamina) are pretty cool; the whole game feels more physics-based and there may be a few ways to get past things. Feels like Zelda’s take on Portal puzzles (lots of Ball puzzles)
• Elephant Boss is BAD ASS. Shadow-of-the-Colossus-influenced stuff. Loved it. As is finding out there’s a dungeon too, spooge.
• I LOVE cooking! I made an omelette (milk, butter, egg, banana) and for the 2nd big boss I made a meat curry 😀 (meat + rice + Goron spice)
• Night time can feck right off! As soon as it hits 11pm I’m finding a fire to camp beside until morning. (I’m not dealing with pop-up skeleton foes!)
• Money-wise, I’m selling elixirs and dishes. Elixir (Lizard + 4 Fang = 100 rupees) and dish (Fleet 2 Drum 2 Carp = 120 rupees). I hear a meat skewer (5 meats) nets 210 but I haven’t tried it yet.
• So far I can’t seem to buy weapons (swords, bows) At the end of the Elephant bossfight I broke the last of my bows and had to stop and scour the land for a while finding more bows. You get a rake of awesome ones during your time with the Gorons. Boo! Where were you 30 minutes ago!
• Voicework: There’s a little bit of cutscenes with voices (apart from Link) which is weird, because they’ll suddenly go back to ‘generic grunt’ and you read the text. Some funny accidental racism, eg King of the Zoras is King Dorephan (ie stereotypical Japanese might say “dolphin”)
• Last thing, where’s my Goddamn Master sword?! Ha! Using junk I picked up from foes like a jobber! It’s so weird to have to wait so long until it appears.

I hate to give numerical ratings, but it’s about a 9/10. (controls, UI system, noticeable slowdown, soundtrack, ‘open world ok plot’ hurts it). Don’t get me wrong, it’s SO GOOD! Super enjoyable, love the fresh feeling of it in an open world, Shrines puzzles are cool, as are massive boss-fights. I wouldn’t buy a new console for it — dust off the WiiU and give it a go!

btw new story arc trailer should be out Sunday night. Had a MONSTER recording session earlier in the week, the episode should be out before we leave for WrestleCon! Hopefully!