Jay and OOC went to see Mick Foley’s stand-up in Dublin (O’Reilly Theatre, March 2nd 2012). It was a trainwreck that lead to Foley never returning to Dublin for another gig. Below the video (we chatted about it on our Q&A!) is Jay’s account written the day afterwards.

As ever, Mick is a true gentleman and a charismatic, humble guy; but the show really didn’t come together. As others mentioned the low point of the show was the 5 hecklers who would should out random foley-esque references. Unfortunately Mick isn’t an accomplished comedian so he couldn’t deal with them very well; he couldn’t just power-on through the heckles, ultimately halting his anecdotes (one right before the punchline) to chastise/reason with a heckler, before having to set up his gag again. He’d offer to give them a refund right out of his wallet; he’d talk to them with civility, and it didn’t work at all. It went on for far too long and felt like you were back in school, when the teacher was giving out. He did bring it back up (how the night hadn’t gone great) and apologised, which was also death.

The meet & greet started about 6pm and the show ended at 11pm – a horrible idea – as you’re potentially (and likely) having people hungover in the crowd. The starting time was late, come about 8pm there was no alcohol in the venue (and was replenished during the opening acts). They initially announced no intermission, and then changed their mind, the whole operation seemed very last minute.

The MC was an irish comedian Chris Brooker, who came out with and Edge t-shirt and theme, and did wrestling gags (ruining his undertaker t-shirt that his girlfriend threw on, while misusing his wrestlemania seat) hit and miss but i did appreciate him trying to make wrestling jokes and the crowd ate it up.

There were two warm up acts, a wexford fella (Mick Thomas) living in NY; who talked about his daughter being his favourite…..then a real yank (Tim Guage) who had a yank routine about taking his kids to the beach by himself (carrying everything, taking his son to the piss-stained public toilets) and being at an age that he’s now bald and can’t fart because sometimes it’s more than that. Universal fart humour. Both guys were on form and quite funny, got good laughs and lightened the mood. Great job guys. Actually met the bald US comedian just outside the auditorium before he went on stage. obviously i didn’t know who he was, he was right to say the toilets weren’t up these stairs. Also wandered into the backstage by accident trying to get back to the auditorium; backtracked like Hawk during a Vader promo when i saw flashlights starting to move in my direction!

The real problem was that this was a pro-wrestling crowd, used to hollering whatever/whenever they want, trying to get the performers’ attention. But this is a comedy gig in an auditorium with 500 seated people. So 498 are silent/attentive, every heckle can be heard. Mick also had a ‘special song’ to play for hecklers, but even patiently waiting and hassling the sound guy from the stage, it never came on. I tweeted Mick about it, maybe he can tell us! Bar the few scattered muppets in the crowd, Foley couldn’t ask for a better, more receptive audience. His comic timing isn’t great, some of his punchlines fell flat and his anecdotes could be more interesting than funny; but whenever he paused, he’d get a laugh and a round of applause. He does mostly whisper into the mic, or maybe it’s a comedian stressing-importance thing. 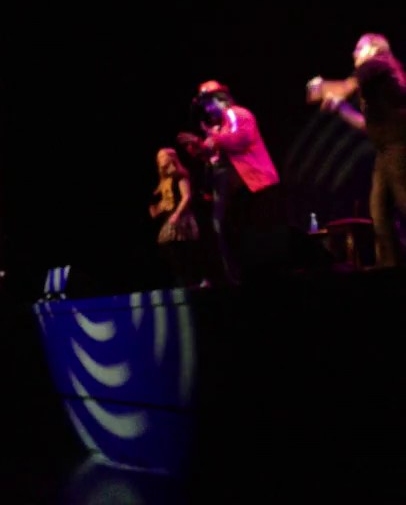 Reading a review from last year’s gig, seems like he had all new material, so I’ll share some of it here.

The funniest parts of the show were cheap shots at TNA (he told a story about Velvet Sky motorboating him, was shocked as a married man, but had an entire TNA crowd as witnesses – literally dozens of people); he initially came out to his WWE music, then re-did the entrance mocking Brodus Clay, dancing! He also stopped halfway through the show to peel back his left sleeve to reveal his crib notes, which got a raucous cheer. Surprised only a few people got the reference and shouted “THE DOZENS!” of Foley fans.

Pretty much the whole set was wrestling (that and complaining/apologising about hecklers); he mentioned getting pumped listening to a Tori Amos song before his WM2006 match with Edge (Kane interrupted Foley in a meditation tent at the venue, having heard what he was listening to, said “remind me never to fuck with you”); Dynamite Kid drinking at a bar and telling a fan (Jericho) who was sheepishly approaching him to “don’t even fucking think about it!”; recounted a story about getting a handy from a hitchhiker while her boyfriend was in the back sleeping (I didn’t like this at all, but he did explain it at the end of the set that it was his wife roleplaying). He sidetracked talking about black comedians and their impressions of white people “hey there feller! Cut the malarkay!” which was quite funny.

He did recount the Hell in a Cell match with Undertaker (and how his wife gave out to him for not ringing home straight after the match – something he does every time – except this one, he was unconsious) and said the worst bump of the night was not getting chokeslammed through the cell, but having the chair follow him down and smash him in the face. He compared it to real sports (where they’d stop if someone was unconsious) to wrestling (where Vince would say “buy him some time”; sending terry funk out there to get chokeslammed out of his shoes. Foley noted he never saw Funk, just “what are these shoes doing in the ring?”…So when his tooth came out of his mouth and pierced his penis, sorry – nose, Taker leaned in and said (Foley warned us about breaking kayfabe) “hey there feller!” which got a big laugh. He said Taker said (in his best Taker impression) “Go home”.

He noted that when he was commissioner, he didn’t have days or hours to read the script; as commish he had to know what everyone else was saying but he loved working live tv shows and having to improvise. Another anecdote was circa 2000 when he saw Vince backstage just before a show talking to Jericho, reminding him to call Steph a “dirty disgusting (etc) trash bag ho”; Foley looking at him weird and saying “Vince, that’s your daughter” and Vince replying “In this business I’d do anything for a pop”. Which got some kind laughs and a round of applause. Whenever Foley’s punchlines didn’t work he’d just get a round of applause.

His last joke’s punchline died/abruptly stopped as he went *straight into* a very short Q&A without missing a beat, it was really very odd. Someone asked about being a wrestler (“don’t do it”), what was the sorest move (Foley couldn’t understand him and so – next!) next autobiography (maybe 1 person cheered) and said he’s written one but that’s why it isn’t out (Mick was generally not that quick on his feet with comebacks etc)…funniest rib (story about Owen — during the attitude era the godfather got his ho’s from local bars, and owen convinced tv news reporters that they worked for the WWF, and were being interviewed on TV, and blackjack mulligan saw and broke it up. “and that was owen” was the punchline).

To end the night he mentioned ‘when people asked me about this tour i’m gonna say it was great – except for dublin’ (which got gasps) and then he backtracked and said ‘except for a few people in dublin’. He also mentioned his experience affecting him coming back (negatively) but the compere/introducer did mention he’ll definitely be back (….dunno about that mate!). After mick apologised for not dealing/having to deal with the hecklers, he did a schtick about torture, and getting motorboated by Velvet Sky (saying it was like being punched by Vader, but in a good way) and torture was not being threatened with something, but being threatened that something great was never going to happen again. He brought out the two warm-up acts; and then left the stage (cursing this show); got a standing ovation/applause but the mood was still very sour after the complaining he did, as everyone awkwardly left.

So it was memorable, to say the least! Anyway I didn’t mean it to go so long, but sure, hope you got a good feel for the show. I gotta stress that most people were absolutely lovely, attentive and had a great time, but the parting thought/mood was disappointment and sourness from Mick, and from the Dublin crowd about the few scattered ‘wankers’ in the crowd. Hey, at least I was there for the first and last Dublin Foley gig!

TL;DR? 99% were the perfect, generous audience but it was ruined/soured by a few hecklers & Mick failed to deal with them.

So I hope you enjoyed the write-up, and see why Jay & OOC repeatedly bring it up. Sláinte!