Cast/Crew: Directed/written by Richard Bates, Jr., starring AnnaLynne McCord as Pauline, and some supporting cast you’ll recognise, such as Ariel Winter (Modern Family) as her sister Grace, John Waters (Zzzzzap!) as the Priest, and Malcolm McDowell as her teacher.

Plot: A story about Pauline: a disturbed highschool girl with sadistic, blood-soaked sexualised fantasies and aspirations to be a doctor.

Thoughts on the film:
• Pauline is an awkward 18-year old girl that enjoys frustrating her domineering, disapproving suburban mother. She dresses in ugly, baggy clothes, makes her acne/herpes blister as visible as possible (quite an amazing make-up job as the actress is actually very pretty) and has poor social skills/comes off quite creepy.
• We see many morbid sexualised fantasies of hers, which leave her breathless in an orgasmic state. These shocking flashes feel real indy cinema; like showing a dolled up Pauline removing a bloody fetus from herself and passing it to a surgeon to put in an oven. I didn’t think they had much artistic merit, just there to freak ‘the man’ out. There’s tons of ’em, like panning across mostly-naked people posed as dead, covered only by bandages, as she gets into a bathtub full of blood.
• A small point, but the artwork for this film is intentionally misleading, it shows the full-makeup gorgeous version of Pauline front and centre, whilst that version is seen in maybe 4 minutes combined. Other artwork has her dressed up in victorian attire, which must account for like 10 seconds in the film.

Notice how despite the ‘real’ Pauline is on the cover, she’s obscured by being upside down. 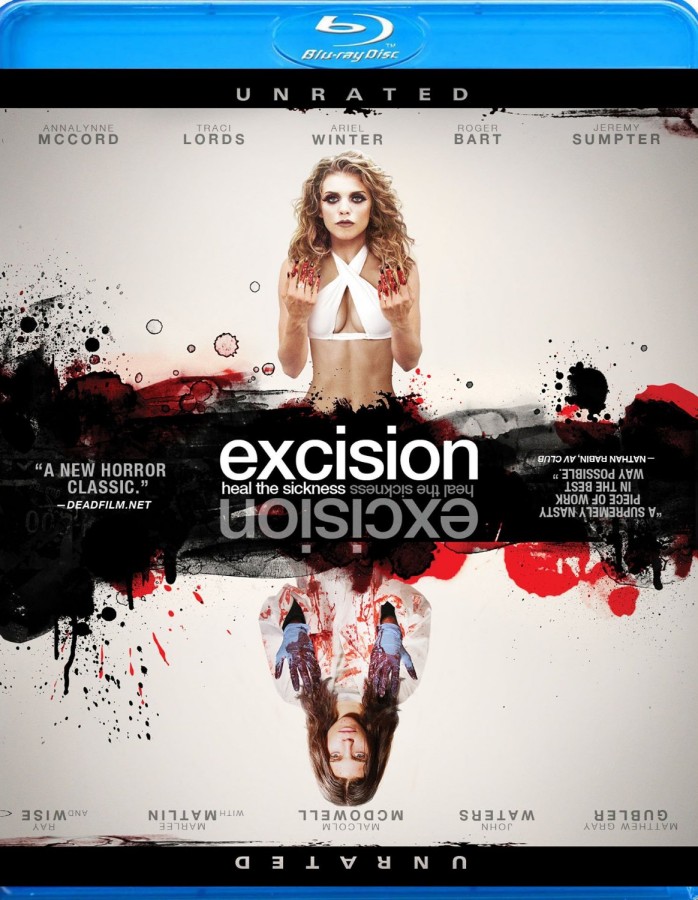 There, upside down is much more accurate. 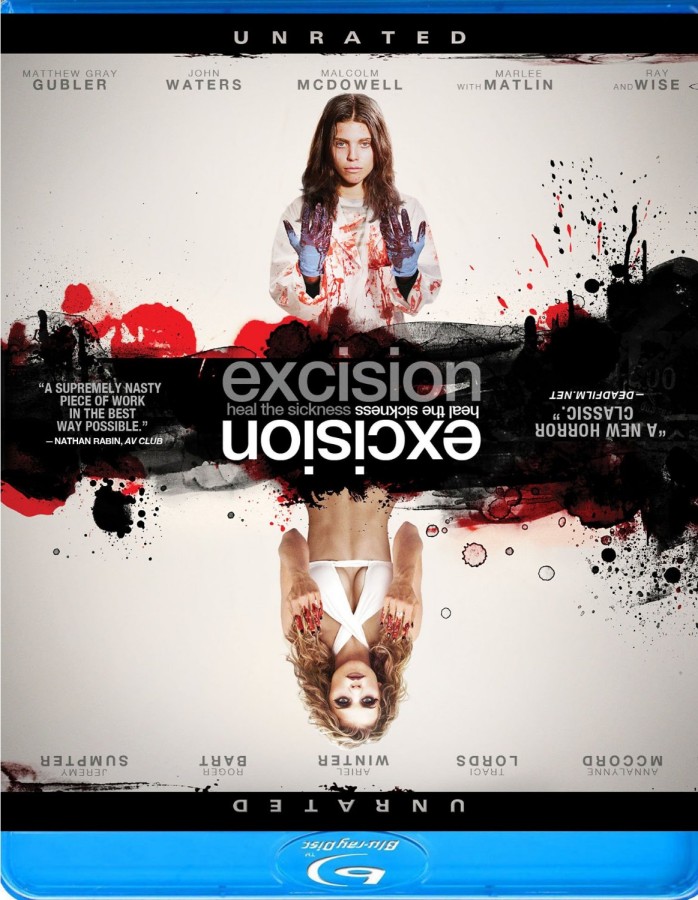 Here’s another pic of beautiful Pauline, to entice/’falsely’ advertise the film. They make a big deal of showing Annalynne McCord as ugly as possible in the film but the exact opposite in the marketing. It’s understandable but also hypocritical. 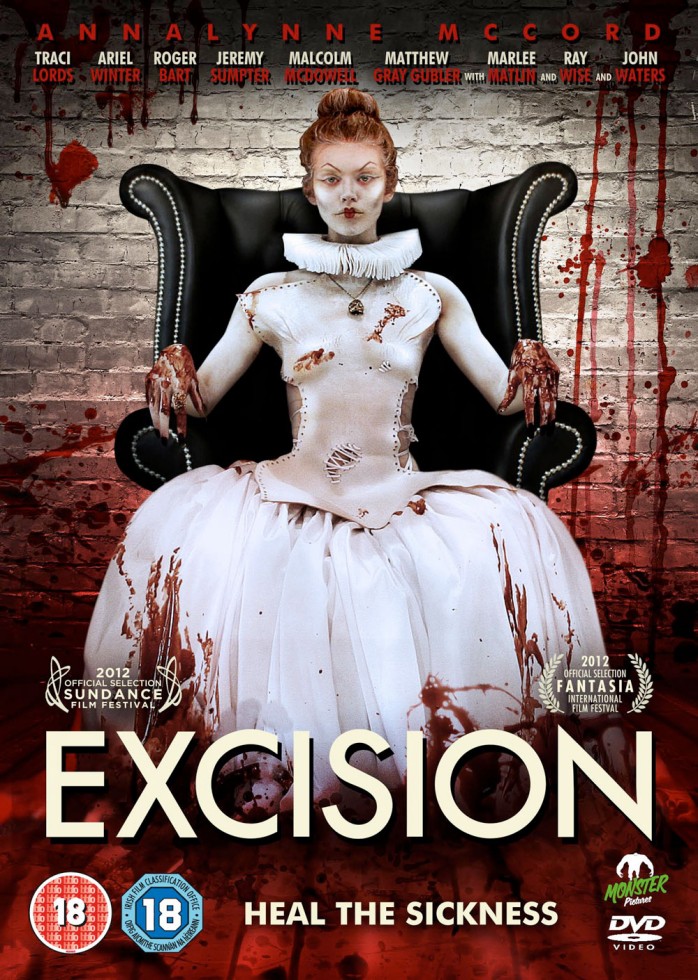 • Lots of blood and entrails but only minor instances of nudity; most of the time it’s either covering up or shot to minimise it, which I find odd (to be prudish about this but heavy on the blood)
• I couldn’t help thinking of when I watched the Evil Dead remake in the cinema. There’s a lot of nasty gore/pain in the film, without much reaction from the crowd – the part that got the biggest wincing reaction is when a guy hit his back off a toilet. It looked painful, but it was a “real situation” type of painful, as opposed to fantastical instances of pain. This film has a different type of “real” disgusting, as opposed to say, SAW-type gore, so it’s closer to home. Instances like when Pauline removes a bloody tampon from herself and sniffs it. It’s real nasty and cringe-inducing because it could be done in an everyday situation.
• I was impressed at Pauline’s ability to seduce Adam, a nice, good looking guy with a pretty b*tch of a girlfriend. I didn’t appreciate her specifically timing the meeting/asking for oral sex knowing she was on her period.
• If you wanted to appreciate your life more, the scene where the mother comes to the school and is with the deaf school secretary (Marlee Matlin), sycophantically smiling at each other, with their false kindness will do it. After a few seconds I was thankful not to be there!
• Pauline (with a massive herpes blister on her mouth) kissed a nice young boy at a dance just to give him herpes, freak everyone out and get herself sent home. That was really mean.
• I hated how she’d ream off facts from the ladybird book of science, and use them in a contradictory/condescending fashion. Of course she’s delusional and mentally unstable so you can’t really give out, but her idea to carry out surgery despite basic, massive flaws in her plans really frustrated me! She’s been reading medical textbooks, but yet she thought she could do it in the basement with her fork and knife, yeah? ARGH!
• The family dynamic reminded me of American Beauty, with the matriarchal family; a constantly judging and disapproving mother, belittling and lashing out under the guise of parenting, and the submissive, beaten-down husband. Phyllis (the mother) lost all sympathy when she bellowed out “You’d have to be f**king crazy to want to spend time with her! […] It is impossible to love her” in their home. She knew/didn’t care that she could easily be heard. To her credit, she does try to improve her relationship with Pauline and is cogniscent to not ‘become her mother’. After the sister gets very bad news, and kisses a boy, Pauline immediately breaks it up, instead of letting her have some joy for a few goddamn seconds. Cheers! I would’ve expected Pauline to be at odds with her sister Grace (who has Cystic Fibrosis) but she’s the only one she’s kind to.
• This is a female-centric film, with lots of family drama with the mother, and her school woes. The writing and acting is done well, even if outcasts itself and I found little to gravitate towards, which is why even if I wasn’t enjoying watching the film as such, I had a lot of thoughts on it.

OVERALL: I get the feeling that there’s a minor group of people that’ll really love this film. I think that women would be much more attuned to this story, as the character, awkwardness and ‘real’ situations are rarely seen in film. I couldn’t relate and didn’t enjoy the type of gore or the main character so it’s not a recommend for me. You may enjoy it as it’s definitely a niche film. If you do watch it, let me know! 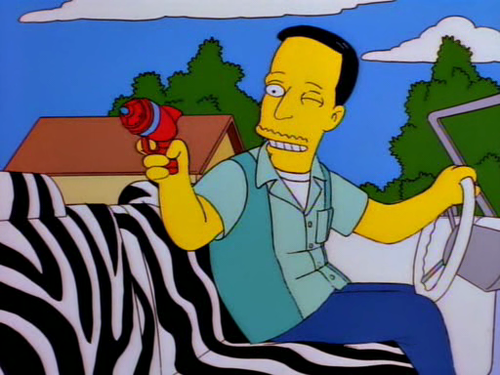