Plot: A young family of 5 move into a house, whose former owners died. They call it the Morello Curse.

Thoughts on the film:
• Protagonists are the teenage son Evan and female neighbour Sam, who has an abusive father. She parleys teenage insecurity into a drive to uncover the haunting.
• Sam and Evan have a budding teen relationship but I didn’t find it awful – it’s actually grand as they’re both likeable, which is a huge win.
• Typical ghostly progression of making their presence known in increasing frequency and intensity, with some fake-outs in between.
• Silly common horror trope of doing everyday activities in the dark. Sitting in your room in pitch blackness! Faulty electrics lead to flickering lights!
• Also the film trope of waking up with more clothes on than when you slept.
• When caught sleeping over, Sam should’ve snuck out the window and rang the doorbell instead if accepting getting busted. However, the parents/family are very accommodating with the son banging some random girl in their new house.
• Unfortunately there are some really cheap startle scares, none worse than the youngest daughter talking ‘to no-one’ in her room, Evan backs out, and “hey look it’s a GHOOOOST!”
• The father says the line “I don’t want any of her juju rubbing off on me.”
• Wide shot used for eating pizza so the actors don’t actually eat the pizza through multiple takes.
• Always fun to see characters watching Night of the Living Dead.
• Dentists don’t do “rounds at the hospital”. Perhaps the father’s been having an affair!
• Some ghosts/demons haunt people, others haunt a building.
• The ghost is only seen in quick shots, some CGI, some prosthetics. It’s a shame you don’t get a good look, because the prosthetic is cool looking.
• You can de-possess someone by hitting them with a lamp.
• The protagonists don’t include the parents in the ghost-find of the century but they do acknowledge it as the parents dismiss it and tell them to quit their ghost-hunting. Later, the roads are closed so the parents can’t get home for a few hours (so the protagonists must deal with this themselves).
• An enjoyable finish/unveiling of the plot. However, the explanation leads to big plot-hole sized questioning of the ghost’s motives, why it killed/didn’t kill others.

Overall: Haunt has a lot going for it – it’s enjoyable, with likeable teen protagonists, an interesting plot and the writing’s decent enough, but due to the poverty of the actual horror (startling “I’m here” boos with sudden high strings) unfortunately it’s below the threshold for recommend. If it’s on TV sure check it out. 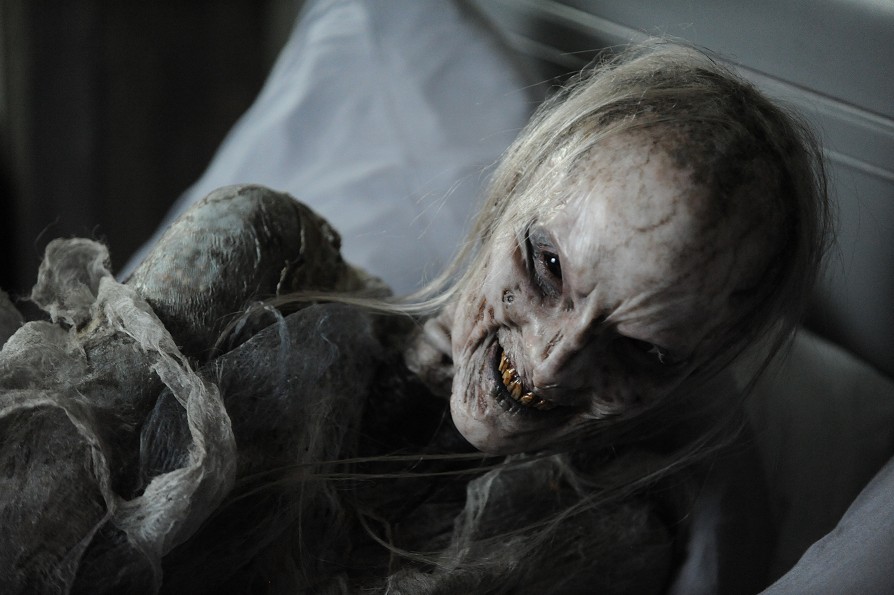