Recently I’ve been going into movies blind, or stopping the trailer as soon as I’ve decided I’m going to see the movie. V1 & I saw this yesterday, let’s see how well that panned out!

Plot: An impromptu rescue mission goes tits-up as a new menace, Krall, attacks the Enterprise to recover an artifact & wipe out a Starfleet Space Station.

Cast/Crew: Directed by Justin Lin (Fast & Furious 3-6), JJ Abrams produced it (he was busy with The Force Awakens), written by Simon Pegg (Scotty) & Doug Jung and featuring almost all of the regulars, welcoming Idris Elba as top heel Krall, and Sofia Boutella as the alien scavenger Jaylah.

Thoughts on the film:
• The film’s production was plagued with tragedy. Leonard Nimoy passed away shortly before production began, so Pegg & Jung were able to write his death into the script; with Zachary Quinto’s Spock being notified of the character’s death, and using it for contemplate his own future. It’s weaved into the ‘down’ (non-action) moments of the film, and there’s a lovely scene where Quinto looks at a photo of the old crew.
• After production had wrapped, Anton Yelchin (Pavel Chekov) was killed in an accident outside his home, where his Fiat Chrysler rolled backwards and pinned him between a pillar and security fence. The models had started to be recalled (Yelchin got his notice of recall days after his death) and his parents are filing a wrongful death lawsuit. Shocking, needless death. Editing the film, his role was reduced and he was given a credit (along with Nimoy) at the end of the film. When the crew are doing Kirk’s mission statement at the end of the film, his voice is one of them, which felt a little odd (I’d assume they’d just write his character out) but I’m glad they didn’t alter it to keep future continuity, as everyone would be forgiving of the circumstances. When Kirk toasts ‘to absent friends’ the next shot is of Chekov, which was a very nice touch.
• Chris Pine (James Kirk). Wow, he looks awful, he must’ve had a lot of late nights. I’m kinda hoping he had some Alan Partridge makeup to make him older, but he’s aged 20 years in the last 7. His storyline is finding futility in exploring the never-ending, ever-expanding galaxy; he’s a year older and also contemplating his future. In the end he’s reinvigorated to be exploring the never-ending, ever-expanding galaxy, particularly this dangerous nebula. Ha! Sounds like he just needed another scrap where hundreds of his crew get murdered! Ehh…hooray! I guess?
• I did like the kayfabe of feeling stuck in a rut, as this is the third Star Trek reboot film, so it’s no longer fresh and exciting.
• The antagonist Krall was a solider and was bum-rushed into being a boring captain after the war had ended. His motivations/ideologies play directly into Kirk’s “I’m not huge on peace-time” storyline. They don’t push hard on making him any way sympathetic, it’s quite black and white that he’s a mad dog that needs to be put down. He’s not memorable or charming though.
• A bit hilarious that there was an emergency rescue mission at the start of the film, big bang of “this is absolutely a trap”! I wonder how the film would’ve gone if Kirk sand-bagged it and said not a chance. No invasion, no artifact, see ya later 🙂
• Loved Krall’s introduction, the opening action scene where his swarm of space drone pilots (‘bees’). Beads? Bees! They do this fantastic, systematic disabling of the Enterprise, destroying it in segments, until it’s nothing but a saucer that crash-lands. It’s very impressive and puts over Krall huge. It reminded me of the S6 finale of Walking Dead where Rick & the crew find all routes blocked off by the Saviors, that he’s immediately outclassed. I also loved how they boarded the Enterprise; by kamikaze diving and the sharp end of their bee ships pierce the hull and open out (like a banana) and the troops run out. Awesome. All hail Krall, and his glorious new regime! Signed, little girl.
• Saying that, they go into a second big action sequence quickly enough afterwards and it becomes noise and is tiring. With a daring breakout of the crew later on, and the big ‘stop the invasion, stop Krall’ finale there was no need for it.
• Bones has most of the laughs, as the sarcastic down-trodden Doc who is constantly inconvenienced. Karl Urban, as ever, plays it perfectly. Being paired with Spock leads to some fun light-hearted relief; especially when Spock suggests how they can find the rest of the crew. 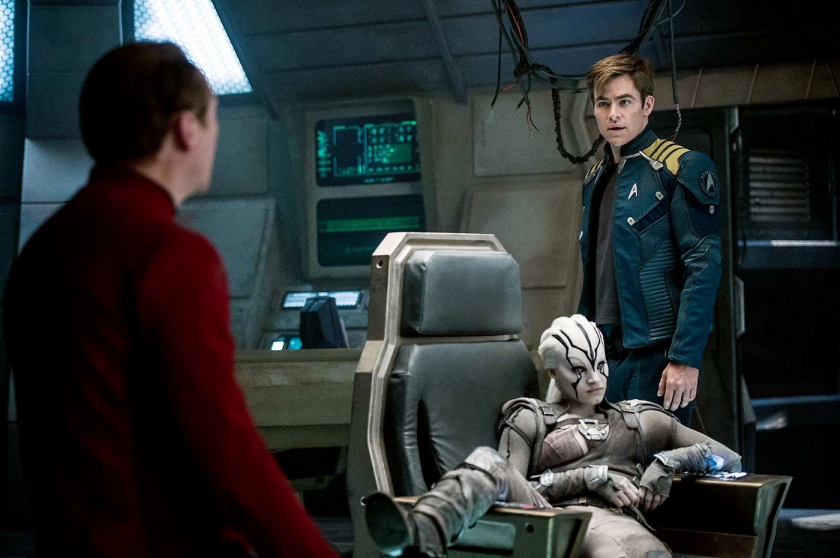 Jaylah sits in her chair in her ‘house’ 🙂 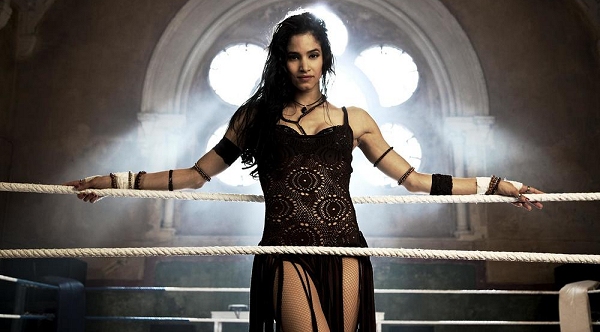 The quickest way to get over is have a photoshoot in a ring!

• Sofia Boutella plays Jaylah, a white alien scavenger. She’s absolutely stunning in the film, completely white skin and hair with black facial streaks. As V1 correctly pointed out, ‘I bet she’s gorgeous in real life, but not as hot as in the film’. Jaylah is brutish and aggressive, but skilled and honest, a fine addition to the roster. Her gimmick is having primitive but alternative/futuristic tech (like she set traps around her ‘house’ which turns smoke solid and captures intruders, which can also be used as barriers)
• I found it funny that Simon Pegg booked his character to have her as his love interest! You gotta lock that down!
• Bit of trivia, Jaylah was inspired by Jennifer Lawrence’s character in Winter’s Bone (where she’s a tough mountain girl who treks to find her missing father). “Jennifer-Lawrence-In-Winter’s-Bone” became “J-Law” which became Jaylah.
• There’s a quick scene that shows Sulu is gay (and has adopted). It’s kinda hilarious how long they leave the scene play so that they know that you know that he’s gay. It’s a nod to George Takei (Original Sulu and noted LGBT activist) who actually disagreed with making Sulu gay as Roddenberry didn’t envision that for the character.
• Carol Marcus (Alice Eve) was hinted at playing a larger role in previous films but they didn’t have a good role for her so they left her out completely, so they can bring her back when it’s a good fit.
• I was a little disappointed that the film wasn’t that pretty, like Into Darkness had some beautiful otherworldly scenes. It’s a big-budget high sheen, but nothing about the locations are memorable.
• There was a Zodiac spot with Scotty where he goes YES!… NO!….YES! Marked out.
• I find it hilarious that Shatner hasn’t been asked to make a cameo in the Reboot series (even though this marks the 50th Anniversary of the series). Makes sense as he has no credibility and would undermine the tone Abrams is going for. Perfect fit for spoken-word singing WWE wrestler themes!
• Classic Abrams/Star Trek with using well-known (“classical”!) 90s music, this time Public Enemy’s Fight The Power, and Beastie Boys’s “Sabotage” — the later used perfectly in a rallying action scene, where the babyfaces make their big comeback. It’s awesome. The logic setup they use to shoe-horn the music into the film is hilarious (“we need a disruption of VHF, like radio!”). Just the right mix of cheese and cool, just something really fun.
• Time between action scenes are treated as such: a quick bit of introspection before another high-octane set-piece. The action is draining and lengthy, so I wish there was more down-time to rest and take it in. It’s expected as the characters had their story arcs laid down in the first film, but it feels a little hollow making the focus of the film being the action (a mindset that generally never holds up over time).

Overall: I enjoy the swashbuckling nature of the reboot franchise, it’s very energised and positive. It’s a franchise that loves that it gets to be Star Trek. The story, dialogue and action isn’t anything outstanding (it’s the least-best of the Reboot franchise) but it’s a fun romp in Abrams’ universe. You’re not missing out by skipping it, but it’s a great popcorn flick.

Clicky for my Star Trek: Into Darkness review!