Before I start I must mention that I didn't stay off the internet but was able to avoid spoilers - unlike whenever something big happens in wrestling or even TV shows like Family Guy! I've never seen such a campaign for anti-spoilers (as well as the amount of pre-booking of tickets) like this before. The internet demanding a 'spoiler-free zone' makes me think of the crazy 'safe space' you hear about on American campuses. Hey, I'm all for no-spoilers and and am ecstatic that everyone's talking about Star Wars!

***This review contains MAJOR spoilers. YE BE WARNED, SAYS I!***

Plot: Finn & Rey (who’s that jumping off the boat?) must get a droid to the rebel base, to help find Luke Skywalker.

Thoughts on the film:
• The film feels very much like a new A New Hope. It’s definitely living in the post-Episode 6 world; as recognisable starships are now in junk-yards and other references (like Akbar and the Cantina, claymation chess) remind you of this. Much like how Rey addresses Han, (you’re Han Solo! Of the Millennium Falcon! You fought in the Resistance!) she reveres him as a living myth, as this film does to the original trilogy. More strikingly, the film’s plot revolves around the Original Trilogy: Kick off in Jakku (a tatooine-like town), smuggle information on a little robot to get to the rebellion, ride in the Millennium Falcon with Han & Chewy, blow up the deathstar/starkiller base, and go find Luke Skywalker. Finn plays a good guy who doesn’t want to be in the fight but reluctantly does what’s right. Also, The Empire’s gone but the First Order fulfil all their requirements (death star, gestapo, sith apprentice & master, even with stormtroopers!). Kylo Ren looks to Darth Vader for strength and even BB8 looks to R2D2 to help him out!
• There’s a huge wave of nostalgia, and it’s wonderful to be back in the Star Wars world, but what about these new characters? I wanna know more about them, but their mission was to mark out over a New Hope; they couldn’t forge their own path. Hopefully we get that in Ep VIII (released May 2017!) As the first part of a new trilogy so you’d expect the bulk of the exposition and character groundwork to be laid here, e.g. Fellowship, Matrix or A New Hope. I’d worry that follow up films have more emphasis on action (eg Star Trek Into Darkness).
• We never get to spend too long with Rey & Finn just talking as they’re always interrupted by an immediate problem/the next catastrophe. As a result, scenes rush & directly follow into each other, and there’s little to no downtime. Stormtroopers are coming, we’ve lost control of the ship, a pipe has broken etc. On the plus side, the pace of this film is absolutely relentless, for better and worse.
• They’ve freshened up the formula with a female and a black guy as the leads, seeing the millenium falcon in snow, or X-wings over water. The main leads do a good job at being likeable and most of the comedy comes from Finn (although straight-up jokes feel out of place in a Star Wars film). The mood is mostly pretty light, danger is ‘action peril’ so it’s not too serious. Big laughs when 2 patrolling Stormtroopers hear Kylo Ren throwing a wobbly, so turn around and walk back the way they came. Best line, “That’s not how the force works!”
• Did you know? Lightsabers require power of the equivalent of 650 car batteries. Great job with the Lightsaber fights – they’ve found a style to call their own; more realistic, doing a few hits and a power struggle. It’s a nice mid-way between the lumbering broad sword-wielding knights (Classic Trilogy) and the lightning quick choreography (Prequels). It was super bad-ass when a stormtrooper swung out a weapon that could duel with a lightsaber. TRAITOR!
• It’s brilliant to see so many physical props, characters and massive miniatures being used. Abrams did what he could for real, and CGI for enhancements/the crazy bits. I can’t stress how much this increased enjoyment of the film; it looks like a lot of these places actually exist (for the duration of filming!). There are also the ridiculously large, blinding CGI explosions, but sure every blockbuster has those so it doesn’t resonate that well.
• This is a modern action blockbuster, as well as paying reverence to the original trilogy. Eps 4-6 had one main ‘element’ apiece (Hope = hot/Sand, Empire = cold/Snow, Jedi = lush forest) — this film has all of those, and more. So many sets at a fast pace, nothing really sticks out as they squeeze so much into a brisk 2hrs 15 minutes. (Hang on, that’s the interior of the Death Star, let’s slow down and enjoy this!) As a positive, the action is frenetic and on a galactic scale, and is directed far better than Lucas. You can definitely see Abrams ‘Star Trek’ fast-paced style here. It’s always engaging.
• That said, this isn’t a beautiful film, where you marvel at gorgeous landscapes. It’s the opposite of LOTR’s slow new set reveals; there wasn’t any grandeur apart from some really cool shots they showed in the trailers, although the opening Stormtrooper/strobe lighting is very cool and one I’m looking forward to seeing again.
• Kylo Ren: Very cool look, love the new lightsaber, love the distortion in his voice. We get the immediate payoff where he removes his helmet, it’s some lad hiding his massive ears under his hair. It kills his mystique, don’t bother putting it back on mate. Could you imagine if in Ep4, Vader took off the mask and it was Hayden Christensen, banging on about how Obi Wan never listens?! 😀 I jest, but much like the performance, the character is still unsure of himself; it’s so weird seeing a Sith having trouble being a Sith – like Dooku & Palpatine were completely sure of themselves and fought effortlessly, like a dance, rather than having to engage people on their level, if that makes sense. Of course he was shot so he wasn’t fighting at full capacity but I wasn’t impressed that two people who seemingly had little or no training with a lightsaber could go toe-to-toe with Ren, who’s been training all his life for this. A small point but why would Ren think the dark side is stronger? His boy Vader turned babyface at the end and gorilla press-slammed The Emperor easily enough! Get the boat! Maybe Snoke showed him some sweet Force magic tricks. (Force illusions, Michael!) 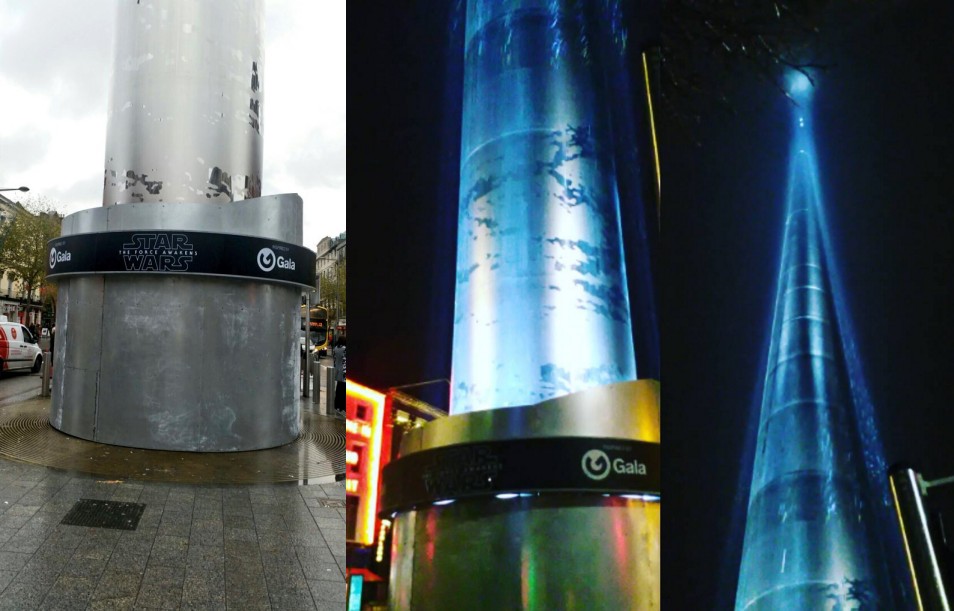 They decorated Dublin’s Spire to look like a lightsaber! All kinds of awesome.

• They make no bones about being influenced with Third Reich with the “First Order” (the New Order) complete with angry shouty speech about crushing the rebellion, to massive of soldiers and a hand salute. Compadres, it is imperative that we crush the freedom fighters before the start of the rainy season. And remember, a shiny new donkey for whomever brings me the head of Colonel Montoya!
• Discovering the force (and it’s different powers) is a great gimmick to introduce the concept to a new audience, the question mark about Rey discovering her powers made her action scenes more interesting; and it’s a bit of vicarious pleasure like when Potter finds out he’s a Wizard.
• Something that I absolutely loved about the prequel trilogy (yeah, what up!) is the soundtrack – Penace had the incredible Duel of the Fates, Clones had Across the Stars, and Sith had Battle of the Heroes (as well as a ton of other great tracks). I noted 2 main original pieces here, and neither struck me as incredible. Rey’s is decent, I hope it grows on me. I was hoping for another Duel of the Fates-level awesome song for Ren, like Revan’s theme from The Old Republic videogame.
• LOVED seeing the Mortal Kombat 1 hierarchy of Kylo Ren & Supreme Leader Snoke (Goro and Shang Tsung respectively). I loved how we just saw him through transmissions, and how he was shown as a massive/God-like being giving orders. Very cool, as was finding out Andy Serkis played him. Can I ruin Snoke for you? Snoke sounds like someone snuck a snuke in his snizz!
• I was shocked how much Harrison Ford was in the movie. I assumed he didn’t really care for the role and would be pop in & out like Leia. But wow he had a lot of scenes. It’s funny that as soon as he’s done with, now we can move on to Mark Hamill. WHERE IS LUKE? OUT IN KERRY, YOU FUCKIN’ ANIMAL YA! More accurately, in Skellig Michael, an island off the coast in Ireland. Mark out/hilarious seeing it in Star Wars. Awesome.
• When Han wanted to go see Leia, I hoped Finn would quip “you’re looking for love in Alderaan places”. *Big break cue hits* Too soon? I know it’d be fan service but Carrie Fisher, put your hair in a the Leia bun. Otherwise it just looks like the actress refused to do it!
• I loved how the Stormtroopers were humanised; you could tell they were enlisted (well, conscripted) men, of differing heights/builds, as opposed to CGI clones. See, Dark Side isn’t all that bad, creating millions of jobs!
• Did you know Daniel Craig was in the film? He was the “remove these restraints and leave this cell with the door open” Stormtrooper! Also Simon Pegg – He played the “one quarter portion!” dealer that Rey traded junk for food with.

Overall: Man, I didn’t want the film to end! I could watch Star Wars for hours. (I have and I will!) I enjoyed watching it and the 2h15m flew by. That said I can’t deny the nagging fact that the film relies too heavily on Ep 4. I’ll probably see it again in the cinema but definitely when it comes out on BluRay so that’s a shining endorsement! It’s a new f**king Star Wars after all! Go see it and lemme know what you think!

Here’s Revan’s theme why not: