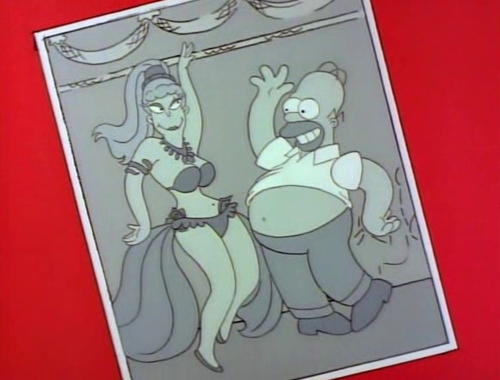 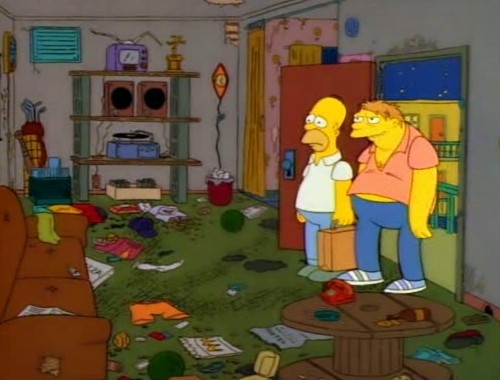 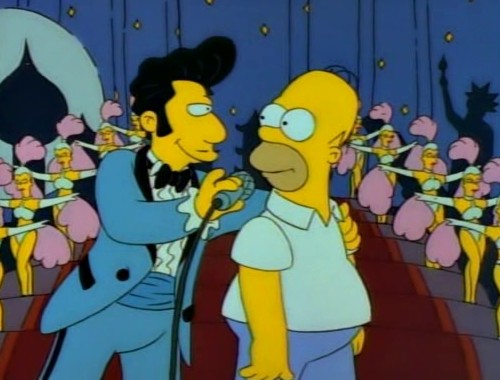 Plot: At a bachelor party, Homer gets photographed enjoying dancing with a stripper. The picture goes viral (well, 1990’s equivalent – it’s photocopied, faxed and passed around) until it lands in the hands of Marge.

Thoughts:
• Shoe’s on the other foot now, isn’t it Marge! She gets unnecessarily angry/jealous of the picture, considering as it’s the episode after her almost-affair with Jacques. Marge explains she’s most angered because Homer taught Bart a bad lesson (that women are objects). I don’t believe her. I bet she’s angry because she was embarrassed at how the picture reflects on her marriage, or the more obvious – she’s jealous her husband had fun with a beautiful woman. Which was completely non-sexual by the way! Homer made no advances towards her and was enjoying himself despite being embarrassed at being the centre of attention. Marge tells him “I want Bart to see you apologise for the way you treated her.” Even Princess Kashmir doesn’t think much of it.
• Bart passes over ads for getting muscled quick, Xray-specs, and a hypno-coin for the spy camera. I love how he wasn’t conned by the first three and went for a mini-camera that took surprisingly great photos.
• Carl voice sounds like Flanders. (His first appearance)
• The printer says copies are 5 cents but the slot says 10 cents. Damn them!
• One plotline for the entire episode – 22 minutes, single focus. Great story, given proper time.
• Barney’s been around since the pilot, but this has the his first proper scene. He’s fucking magic this episode! Amazing one liners. He absolutely kills it!
• Burns asks for Homer’s secret to his “animal magniteesm”. He could’ve parleyed that into a side-job/an extra couple of bucks! (He did in Season 13)
• Bart is dragged to every gentle men’s club in town to find Princess Kashmir (arguably doing more damage than the original ‘offense’!)
• Homer’s such a great guy in this episode. Humble, loves having a laugh, a good dude who loves his kids and wife. It contrasts so sharply when he comes off as a jerk-ass to Frank Grimes (or “Grimy” as he loved to be called). So likeable in this episode, happy to do right by his kids. Seeing him reluctantly join in the big number (“about a million girls!”) and Bart dancing along is lovely too see.
• This dancing on stage with showgirls is later redone as a long-standing couch gag. Of course Marge disapproves “Oh no – He’s sunk even lower.”
• Marge tells Homer his actions are extremely important, because Bart strongly looks up to his father. It’s absolutely true in these early episodes. Bart’s happy to be brought around town, and not for the first time, marvels at how cool his dad is (like when Homer rallied for safety around Springfield).

Notable Quotables:
• Homer “Hey what is this? The Spanish Exposition?”
• Bart and the “female man” (female mailman) “Where’s my spy camera?”
• Moe “What’s the matter Homer? Hottest ladies night in months and you’re not checking out the action” (referring to the lone haggard woman at the end of the bar)
• Homer lamentingly points out his house from Barney’s window, saying its the brightest as someone left the porch light on.
Barney (ringing Marge & chastising her) “You left your damn porch light on! Homer’s not made of money!” AMAZING.
• Barney “Party down the hall. This apartment complex caters to young upscale singles like me” *Disgusting Belch*
• Homer’s monologue about women “[…] They’re our nieces and nephews. Well, not our nephews.”

Overall: A really well-written episode, however I was annoyed by Marge’s over-reaction to the situation, which forwarded the plot but made her more dislikeable. Great show but it’s more interesting than funny, outside Barney’s AMAZING scene.

Life on the Fast Lane