Our last Horrorthon film this year, and it’s another Irish horror, with an introduction by the director! He said he was getting older so it was now or never to make a film, and recounted talking to a financier in Starbucks. He claimed he could shoot a film in 5 days. She bit, and we’re in business!

Plot: A new couple camp out in the woods. But they’re NOT ALOOOOONE!

Thoughts on the film:
• Before we start, yes, you CAN make a film in 5 days, sure you can make a 90 minute film in 90 minutes! Doesn’t mean it’ll be any good! But the film hinges on the charm of the new couple, and that’s successful.
• This is a mostly scripted film so getting everything done in such a short time is impressive – they shot 21 pages of script per day, holy shit!
• It’s nice to see Irish people having a laugh on screen, it does get over our jokey nature. They film spends a good deal of time with them getting breakfast at the start, who genuinely look like a warm couple together.
• They go to Army Bargains to get camping gear, which is hilarious as it’s a real store in Dublin.
• It’s found footage/hand camera style so it’s always a bit shaky, and the characters make reasons to film (and tell each other stop filming a lot, but never do).
• Crone Woods is a legit, gorgeous place in Wicklow! In this film it was known as an area for Witches’ Coven. 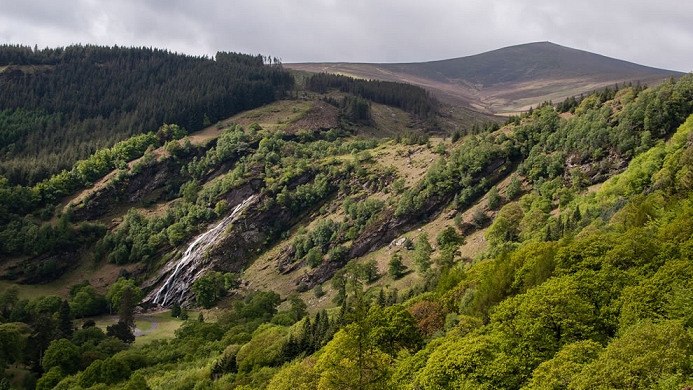 • They have a poke around (IIRC) the Hellfire club on Montpelier Hill; which is a legit ruined stone monastery from the 1700s. It’s both a cool visual and quite haunting looking. • They keep us interested as the girl teases giving him a blowjob. It’s actually used as a scare which is perfect timing.
• It gets Blair Witchy as Ethan hears something in the woods at night, goes to investigate, they search around, their tent is gone. Their ensuing annoyed argument and storming off is very real, very Irish!
• They see there’s 3 stalker lads in mask at night. The main big dude loses some scary points as it’s just some heavy-set man who has difficulty walking. I don’t buy he’s a physical threat! They get around it by having it in silence and scenes where creepers stand motionless & stare blankly into the camera. Really booking getting the maximum out of ’em.
• So the couple try to get the hell out of the woods and come across a house, finding the stalker lads’ masks. They look like they have bandages drenched in tea placed on them. One is a scream mask with a rubber nose/ears on it! Hilarious.
• Trespassing for help they come across a house and the props are SO cheap! It’s way too real, like a string holding up a mask on a shower head. Half expected to find St. Brigid’s Cross hanging on the wall!
• Finding sanctuary in a house with friendly women offering tea, biscuits and dinner is nice to see (and quite Irish).
• I enjoyed the big revelation and the finish dash to escape was interesting.

Overall: It’s quite cheap looking but there’s a lot of positives, some good ideas and the main two are likeable. There’s nothing new to found-footage genre, wish it had a bigger budget. I can’t recommend it but it’s cool to see Irish people being Irish on screen.