5 likes
Myself and V1 saw Fantastic 4. On the back of hearing unanimous bad reviews (3.9/10 on IMDB, 8% on Rotten Tomatoes) and some ridiculous internet-teen ratings of 1/10. C'mon! How bad could it be? Let's do it to it!

***This review contains plot points/spoilers. However, DO NOT WATCH THIS FILM.***

Plot: This is an origin story, which takes 90 minutes to tell, and only gets past that and into a proper storyline in the last 20 minutes. Reed & Grimm were childhood friends, Reed gets a job working in a huge research lab to continue his work on teleportation, meets Sue & Johnny storm there, a sneaky trip using the teleporter ends in disaster, everyone gets super-powers. Now real quick, save the day!

Worth noting a big bit of scandal: FOX claimed director Josh Trank was “erratic” on set and were displeased with the final film, so they ordered re-shoots without his supervision and removed/changed big plot points. Trank absolutely buried the film a day before F4 was released: 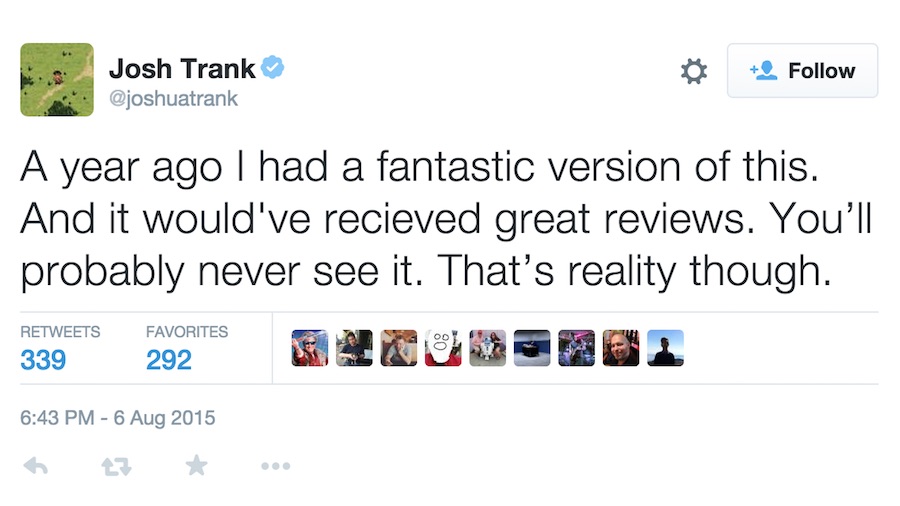 Thoughts on the film:
• I feel bad for the actors here, being in a Marvel movie, but swerve! It’s not run by Disney (who’ve been knocking it out of the park in general), but rather FOX, who have a wobbly history of Superhero movies.
• Dan Castellaneta (HOMER SIMPSON, YOU FUCKIN’ ANIMAL!) plays the ignorant, dismissive school teacher. Popped when I saw him!
• The script is digestible, nothing remarkable – it keeps it’s head down; although it has multiple, awful clunky “show how much heart we have” dialogue – like when out of nowhere, Sue Storm’s dad tells her that we’re family and to stick together. Reed has a “let’s work together as a team” speech which is equally cringey.
• The main problem here is none of the characters are charismatic or charming – especially Reed, who is the focal point of the film. Miles Teller was an odd choice, maybe he’s much better in other productions. Kata Mara (Sue) is pretty and I LOVED her in American Horror Story, but she’s played down extensively – zero sex appeal, she’s basically a guy here.
• Victor von Doom is like a Resident Evil villain – constantly foreshadowing his heel turn, saying how the earth is broken and it’s thanks to those in charge, we should start anew etc. His character motivations are quite basic, they make it very clear cut that he’s out-and-out evil.
• The interim bad guys are the US government suits, which are about AVATAR levels of simplicity! Their plan is to weaponise whatever they can find in the name of freedom.
• Listen I gotta say some good stuff! Doom murders people by having their head explode. Unsure of the physics of it but it looks cool, and surprised to see a bit of blood in this otherwise bland film.
• Also, Doom’s suit is formed from his safety suit fusing with his body and with the other world (that’s a great idea) and has glowing green cracks. I thought it looked very cool.
• Dr. Franklin Storm (Sue & Johnny’s dad) is the non-union equivalent of Morgan Freeman, delivering deep, calm baritone exposition. I enjoyed his voice, probably the best thing about the film. Get busy living or get busy dying!
• The CGI is pretty ropey. They don’t really hide where they cut from CG to real actors, makes you think of the actors doing the scene in front of a green screen! Bit of destroy-the-world type standard fare (Crater, lots of flying debris, smashed cars etc)
• I enjoyed how they rendered The Thing, thought he looked great. He does get some sympathy when asked if it hurts (being a rock monster), he responds “I’ve gotten used to it”.
• I laughed when Doom says “there is no Victor, only Doom!” which is straight out of Ghostbusters (“There is no Dana, only Zuul!”)
• Fun nitpick: Reed escapes the facility and is hiding for a year, and gets found by tracking his email. Why the fuck is he using the same account? Why not create a new account?! DAMN YOU GOOGLE PLUS! He also leaves to escape the Government baddies but when caught he complies immediately and does the work he was attempting to do solo anyway. This makes him a huge idiot/arsehole. There’s a lot of little things like this.
• So was director John Trank’s vision better? Probably, but the whole film being average at best – he’s gotta shoulder at least half of the blame.

Overall, it’s an instantly forgettable movie, but F4 is not a horrific film – it’s just not any good. It’s a slightly below average movie, like a 4.5/10. Yes it’s boring and feels like a $200m ashcan copy to retain the license, but sure it’s my fault for paying to see it! I never want to see it again or it’s sequel. Let Disney have it. Avoid!