***Note: This trailer has nudity/gore***

Cast/Production: Directed by Kurando Mitsutake (The Grudge 2), starring Asami (Machine Girl, Zombie Ass; The Toilet of the Dead, and 5 “Rape Zombie: Lust of the Dead” movies) as Mayumi, the titular Gun Woman.

Plot: Japanese indie horror flick. GUN WOMAN is about a drug addict that’s trained into a “perfect killer”, to take revenge for her kidnapper/surgeon/trainer’s murdered wife. The target is a rich Yakusa’s son, who is also a necrophiliac cannibal. She allows guns to be surgically placed inside her for later retrieval on this assassination mission.

Thoughts:
• OK, obviously, that’s ridiculous. The film cannot be taken seriously, although the film is not played for laughs (outside of the Rocky-esque montage). Boulder-sized logic holes constantly come up. Why train a drug addict starting at 28 years old? Why does she swing like a drunk? Why do they think local anesthetic is the same as a paralytic? There are only 4 security guards, just use a knife? There are only 4 security guards, fucking storm the building! Why are the gun parts surgically placed deep in your body, causing massive blood loss – what’s wrong with her buttocks and thighs? Something more plausible pops up every few minutes!
• There are long bouts of nudity in the film. The film opens with a woman showering, there’s a woman who bleeds to death standing naked, and protagonist Mayumi does her mission entirely naked. Doing flips and bleeding out, completely starkers.
• By the way, Mayumi’s the picture of health – great skin/make-up, lustrous hair etc. Frizzing her hair and having her eyes closed doesn’t sell “drug addict”. Try harder!
• Positive: The target is a really creepy Japanese dude. So well done.
• Retrieving her gun parts, she’ll bleed out, so she’s 22 minutes to complete the mission; giving it more of a sense of urgency.
• To prove this fact, she cuts another woman in a similar fashion and she drops dead in 22 minutes. I thought this was actually done quite well.
• They explain her master is a skilled surgeon, able to make any scar disappear with his suturing (to explain why she doesn’t have body scar makeup) – preposterous but I appreciated they addressed it.
• The B-plot is an assassin/driver en-route to her. They speak in English, whilst the rest of the film is in Japanese. It’s very odd to have the two mixed.
• The budget is almost non-existent, spending the money on blood packs and convincing Asami to spend the last 25 minutes of the film naked.
• Gun woman makes a tourniquet out of her own hair (which was funny…em, why not the clothes of her dead attackers? And she doesn’t bother with the bullet-proof vest either!)
• I did like the Gun Woman song at the end, but absolutely not the “Gun Woman will return” text!

Overall: Perhaps I just don’t have the mindset to just enjoy the garbage placed in front of me. The story, writing, acting, budget, effects etc are all bottom of the barrel. I couldn’t get into what they were selling. The constant nudity can’t drag this up from an “definitely avoid” status. Awful!

Click for a pic of a typical day on the set! 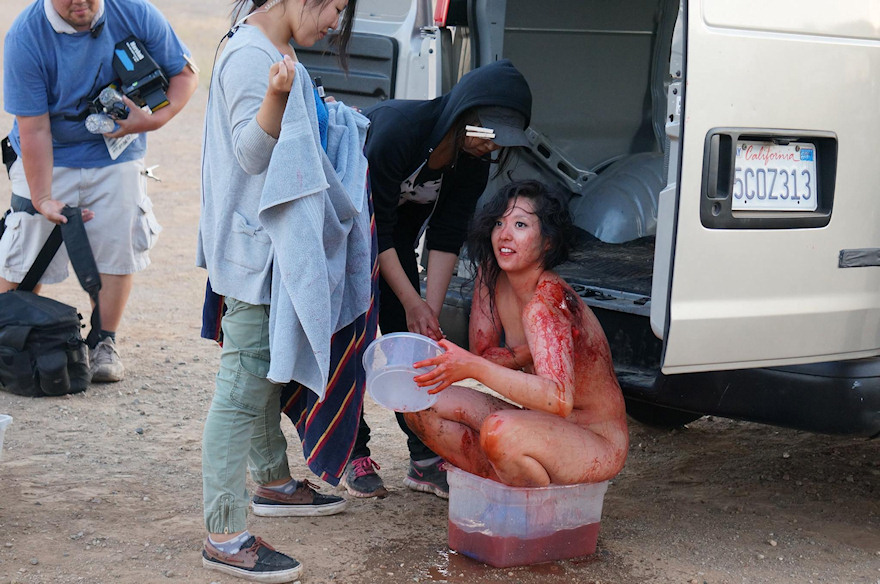