4 likes
Do not go gentle into that good night; Old age should burn and rave at close of day. Rage, rage against the dying of the light.

Plot: Earth is dying. We follow a crew of astronauts through a wormhole in search of a new habitable planet.

Massive things to note:
The Visuals: Oh my God, this film is gorgeous. It’s shot beautifully, from the dusty corn fields, to the space travel, and the otherworldly terrain. The scale of this film can’t be understated – I have a big TV but this film is the first one that made me wish I saw this in IMAX. Looking out into space from the side of the spacecraft, especially the absolutely breath-taking depiction of a black hole (a spherical diffraction containing a universe) as well as behind the horizon, the tesseract and beyond is quite an experience.

Real props/sets: I applaud Nolan’s continued use of as many physical sets/props as possible, it looks fantastic and you can tell that they built massive sets and scale/huge miniatures which they termed “maxatures” (or “bigatures” if you’re into the LOTR DVDs) which look incredible and is equally impressive from a production standpoint and deserving of admiration. Real sets/scale ships and CGI in perfect harmony.

Aspect Ratios: I must note the negative that Nolan, like the Dark Knight, employs a shifting aspect ratio. If you count the archival footage at the start, there’s three different ratios. I realise Nolan wants to shoot as much as he can in IMAX, but perhaps just shoot entire scenes in IMAX (as he does) and don’t include a single IMAX establishing shot, and then back to black bars, and in and out again (which gets up my nose more than everyone else, I find).

The Run Time: This film is 3 hours long. It helps with the feeling of grandeur of the film, apart from the slow opening 47 minutes (until they get on the spaceship). This length, combined with Hans Zimmer’s organ-swelling score (and the setting and plot of course) make it feel very grandiose and 2001. Not the great year in wrestling but A Space Odyssey. 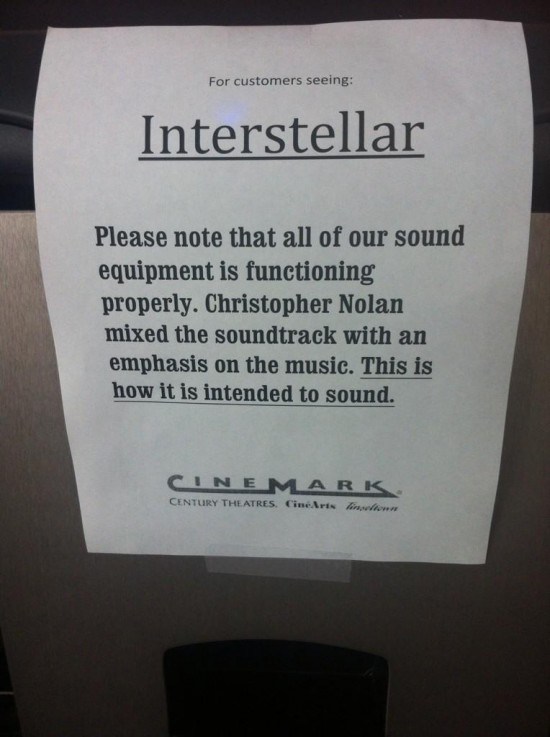 The Audio: You might remember the picture that went around at the time where Cinemas put up notices saying it’s not our sound system that’s the problem. I am sad to report this is literally the second worst audio experience I’ve had with a film (the first being Suspiria). Horrific, from both a levelation standpoint and muddled dialogue. You will watch this with the remote in your hand. This final mix is intentional – Nolan spent 6 months on this “adventurous choice”, experimenting (aka garbling) the audio track. The score and effects bear over dialogue, whilst soft spoken words are mumbled. Nolan thought it’d be fitting given the exploratory nature of the film – he thought wrong – this is a wildly selfish act. He knows the story and dialogue inside-out, but we don’t, and he acted without the audience in mind. This is a high concept sci-fi film with many bouts of important exposition. This isn’t the time to muffle speech or pass it through a low quality radio feed. We should be enjoying the experience, not straining to hear what’s happening. Horrific describes this intentional mistake, such a shame as it constantly hampered such a wonderful, beautiful visual experience.

However: That massive negative out of the way, I love the film’s premise and storyline/developments, and the scale of which it plays out. Conversations about which planets to visit and their pros & cons, relative time dilation in an amazingly compressed space, heel turns a mile off, tense action set-pieces, all absolutely brilliant. This should be the take-home message of the movie – long stretches of it are excellent.

Other thoughts on the film:
• The impetus for the expedition is that “blight” has decimated the world’s food and threatens humanity. Bollocks! I absolutely don’t buy this premise that something could creep up on humanity and it wouldn’t be solved when it needs to be.
• McConaughey plays Cooper, the talented, sweet-talking maverick/pilot-extraordinaire, who is also oddly used as exposition. e.g. “hi there, what’s a black hole?”. What do you mean, What’s a black hole? Aren’t you an astronaut?! I appreciate the exposition/explanation but him being used to do it beggars logic. There’s definitely a bit of ‘James Kirk/Star Trek 2011’ with him showing up late to the party, captaining the spacecraft and using luck and skill to pull of extraordinary feats. Also, I get he’s leaving to save the world but I didn’t care for how quickly and easily he made the decision to leave his family (he leaves without reconciling with his daughter) and then starts bitching when things take longer. He knew the risks and that this was likely a one-way mission, like the 12 astronauts before him.
• There’s some levity in the film, including use of artificial intelligence via TARS and CASE, who are giant Robot KitKats with truth and humour settings. Kudos for not making a C3PO/R2D2 marketable robot, but rather a functional, mathematical one.
• The film is very heavy on sentimentality, it works in some places, but becomes overly heavy-handed. The hinge of the story is about a daughter whose father left her and she’s reaching out to him, the importance of love, promise and faith; the key to science is love. The heavy-handedness crosses into cringe territory multiple times though; Amelia the scientist saying “my decision is based on love as it crosses time and dimensions blah blah” and “because he made a promise to his daughter” is real faff.
• Having one-way communication (only receiving video logs) is a great way to give information and have emotional scenes and reactions, forwarding the plot whilst only being half-cathartic (as they don’t get to talk back/converse.)
• There’s an uncredited notable part from a famous actor, that is a great side-plot and won’t spoil. There is a moment…
• If you wanted to repopulate the human race, bring more than one woman. No fun with embryos.
• The final parts of the film has caught a lot of heat, I can see why but I enjoyed it in general. Sure it steps on it’s own rules (RULES!) a bit but was fitting giving the heavy push for sentimentality/family.
• Marked out for the possible Discworld reference of L-Space (or Library space), where masses of books cause time-space distortions, and all libraries are connected (by ‘bookwormholes’).
• There’s dust f**king everywhere! Has mankind not invented a way to shield houses from dust and giving everyone respiratory diseases? C’mon!