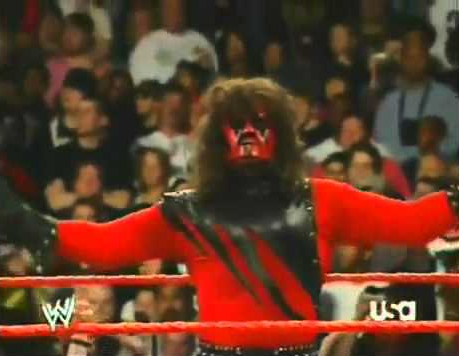 WWE pimped this movie by the only way they know how, shameless promotion: They had Kane repeatedly hear the date May 19th, May 19th, May 19th, the opening day of the film. It lead to one of my favourite worst wrestling angles, where Kane heard voices saying ``May 19th`` in his head (they council me, they understand, they talk to me) and was eventually confronted by Attitude Era Kane! It was Festus aka Doc Gallows in a massive wig. The two had a stinker at Vengeance 2006. In the end, Imposter Kane won (to forward the feud) but WWE just finished the feud by having Kane remove Festus's mask and hoof him out. I'm a massive fan of supernatural angles, and I hated how the commentators completely sand-bagged the angle - labelling the second Kane an imposter (i.e. it's just some lad in a suit) ruins the whole storyline straight away. ACK! SELL THE STORYLINE! YOU SOLD ROBOCOP & the Horsemen, SELL THIS GOD DAMMIT!

Plot: SEE NO EVIL is a 2006 horror film from WWE & Lionsgate studios starring WWE wrestler Kane (listed as Jacob Goodnight as opposed to Glen Jacobs). 8 Misdemeanour inmates trade off a month of their sentence for a weekend cleaning an abandoned hotel. Guess where serial murderer Kane is living! Rock on.

Thoughts:
• Did you know? even though this film turned a profit, WWE actually lost $3 million because they picked up the entire tab on production costs. Also, there were several names for the film during production: Eye Scream Man, The Goodnight Man, and simply Goodnight before settling on See No Evil.
• The storyline is that the cop who originally wounded Kane (by putting a bullet in his head, which only makes him angry!) is now a warden, who has tasked sexy teens to clean an abandoned hotel where (in fortuitous storytelling) Kane is secretly staying. However it’s filthy and they don’t give them any practical devices (just pushbrooms etc – how about a fucking vacuum cleaner!) so the exercise is futile – they’d never get anything done in a weekend!
• I actually quite liked the look of the set: a well-dressed, rotting, run-down building that houses a giant, murderous psychopath.
• As Margaret the owner explains, the hotel has many hidden passages (used for stalking and fakeout scares). Kane makes himself known 28 minutes in, and from then on, the film is spent with the inmates trying to escape from him & the hotel.
• Kane’s calling card is removing the eyes of his victims, with his own fingernail no less. He also has a massive hook to impale and drag people around, which sure enough happens, it’s a cool gimmick, and such a massive outlandish weapon works for such a huge guy. Kane looks the exact same besides wearing some tatty clothes. (shaved head, one white eye). He doesn’t talk throughout the movie, and that’s the best use of him, carrying the film with his look & presence.
• There’s some humour in the deaths, like the female warden dying in a lift right after deciding to accept her marriage proposal, and her dead body keeps the lift doors from shutting. Also, getting a phone shoved down your throat. It’s an early 2000s small phone so it’s not the worst, like if it was something like a Nexus 6!
• There’s one scene with cheeked-nudity, where tattoo’d Ciara decides to take a shower in the dirty, abandoned hotel, and Kane peeps through a hole in the wall.
• We get flashback snippets of Kane’s backstory throughout the film; being abused by religious mother; kept in a cage, the mother removing eyes, so they could See No Evil (see what I did there?); eyes are the window to your soul and all that. Also, stop masturbating.
• Kane keeps Ciara locked up in a cage and starts rubbing himself to her. This segues into the GREATEST film trivia of all time, the film’s screenwriter Dan Madigan revealed that Vince had strongly suggested in the film, Kane should whip out his penis, and it’d be a three foot long cock. Seriously. Yes. Imagine Vince on the phone shouting “3 foot cock!”. Madigan also buried the film, saying they brought in another screen writer, putting in all the horror clichés he purposely left out.
• Apart from one dodgy CG death, I was impressed with the gore: It felt visceral and the filmmakers enjoyed showing it (eg in the film’s cold-open, the camera zooms in on a woman’s bloody eye socket, or dogs licking a broken arm). There’s a precursor to Mortal Kombat’s X-Rays as we see a CG heart internally being punctured in slo-mo.
• FYI, there’s no swearing, the characters catch themselves before actually saying the word.
• No 3 foot cock is a shame. Also, no proper wrestling moves – It’s unreasonable to expect a tombstone, but c’mon the fuck, do a chokeslam! He teases a double chokeslam but sadly we don’t get it.

Overall: All in all, an easy watch, a fun horror that enjoys it’s gore. I think this silent monster character is the best use of Kane, so good stuff! WWE’s best horror film, and it’s either this or The Condemned for WWE’s best film, it’s good enough to be a 6/10 horror film. I still quite like this film, give it a watch!