Cast/Crew: Directed by Phil Joanou (who directed a lot of U2 music videos, and The Rock’s Gridiron Gang) and written/produced by Robert Ben Grant. Lots of bigger names than you’d expect star in this horror film – Jessica Alba, Lily Rabe and Tom Jane.

Plot: 25 Years after a mass cult suicide, the only survivor agrees to go back to the Veil – the Cult’s compound – and uncover it’s secret.

Thoughts on the film:
• Not to be confused with the 2015 action/adventure movie of the same name about warring tribes.
• The film cost $4m, or 2/3 of what it cost to make Tommy Wiseau’s The Room!
• The background of the film is based on the very real cult groups, mostly Jonestown (The People’s Temple), where in 1978 in Guyana, South America, 909 Americans committed mass suicide, urged by Jim Jones in order to support socialism), and the “Heaven’s Gate” cult, which in 1997, 39 people committed mass suicide in an attempt to reach an alien space craft. In the film it’s “Heaven’s Veil” and their leader “Jim Jacobs” (Tom Jane).
• Jessica Alba (aka Maggie) is a documentary filmmaker who gets Lily Rabe (Sarah) to go back to The Veil to recover any uncovered footage, and try to understand what happened at the compound. Sarah agrees, wanting to understand why she was left alive.
• The thrust of the film is that the crew get stranded at The Veil, as odd occurrences and horrible accidents start a-happenin’.
• Why won’t they leave? Alba’s dad killed himself a few days after the raid 25 years ago, so she’s looking for answers too, despite someone/something knocking off members of her crew.
• A big point – It’s very difficult to show a cult leader, and have it not look like an actor playing the typical 70s cult leader. This falls straight into the trap and never escapes – we get to see footage of him but it’s all in flashbacks, so no time to really sell you on it. Jane overacts and isn’t convincing – I never forgot it was an actor throwing out tired semi-scripture. The other problem is that Tom Jane is not charming in this role (he absolutely should – he’s basically playing a con-man) so he looks, sounds and feels quite hokey. Sorry Tom!
• Worth mentioning, when Jane was cast in the film (he previously made a short Punisher film with the director), his part was re-written from fundamentalist Christian to occultist.
• The film is shot as a regular movie, but since the characters are a film crew, it switches to their footage intermittently, which is this awful kayfabe obvious “I’m a documentary” footage, needlessly zooming in and out. The Veil was originally supposed to be a found footage film but the team thought it was played out, and re-wrote it as a more traditional film.
• The other stylistic flub is using a mild wide angle lens for most of the film. I can see that they were trying to make it otherworldly (like walls at the sides of the shot would bend) but it’s not just a few shots, it’s most of the film, which gets annoying, seeing characters and the ends being stretched very tall for no reason.
• Horror wise, it’s a ton of jump scares, especially POV skeletons opening their mouths and zooming into the screen.
• Our team search for an undiscovered room (where the cult filmed footage) and happen across an undisturbed house — not found by the FBI because it was across a small lake which you can walk across. Seems like a real shabby investigation, considering there was a prominent unaccounted for body in there, important to the case.
• Something I always like, they find the home movie reels and watch them, filling in the back story. So a lot of the present day film is inter-spliced with watching Jim’s propaganda/video records. His believes he can achieve transcendence – separating the soul from the body of himself and his followers, and live forever…It’s a shame Tom Jane’s acting is so hammy, as these are the most engaging parts of the film, chronicling his crazy experiments, scary leaps of faith, and getting his congregation to believe.
• Oddly, Jim’s 1970’s home movies are presented in pristine, vividly colourful, widescreen HD, and they put in film burn transitions at the stand and end. It’s a phoney stylistic choice. Watch Sinister for how to make super 8mm footage/home made snuff films look amazing and feel gritty.
• From here on in, the film turns into a ghost/slasher flick (they’re in basically a cabin in the woods!) with cast members being stalked and knocked off, until the big revelation and finish.
• Some X-Pac heat at we get Jessica Biel in a crucifixion pose – something nobody asked or wanted to see. Maybe she thought it would be this iconic, lasting image but it comes across as tasteless cheat heat, done just to get a reaction out of people. 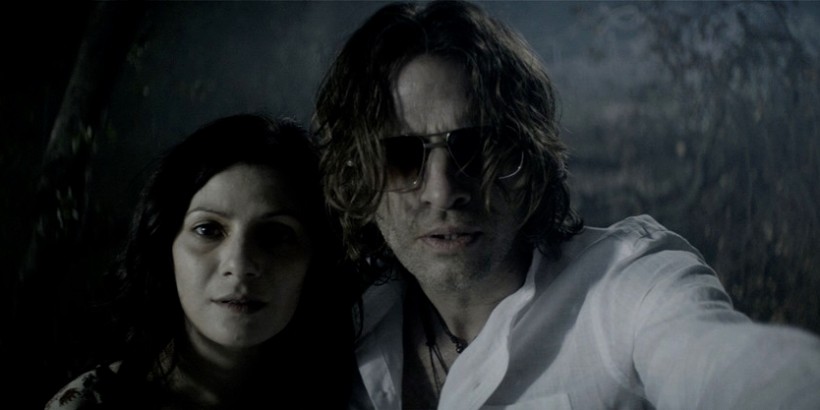 Why would you watch this film?
Apart from the wide-angle lens and zoom-in, zoom-out spliceys, it’s shot nicely and doesn’t look cheap. There are some big name actors and religious cult based on reality is fertile, fresher ground. You watch the old home movies alongside Alba’s crew seeing if Jim Jacobs can actually do the impossible – separate the soul and the body.

Overall: Average, completely run-of-the-mill horror film. Disappointed to see it squander having such a big-name cast with lazy shocks and acting from Tom Jane. For once the trailer is an accurate portrayal of the movie! Avoid.