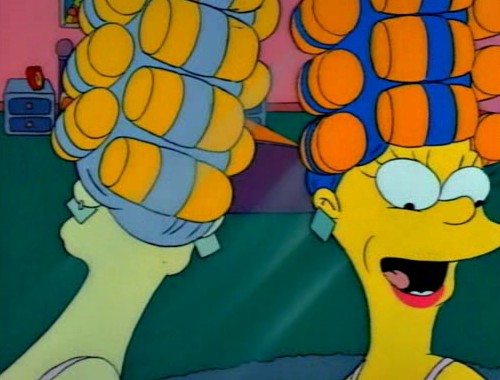 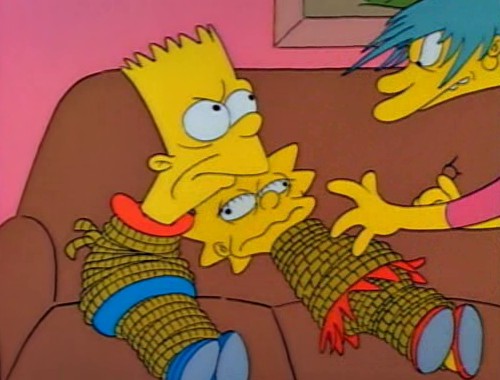 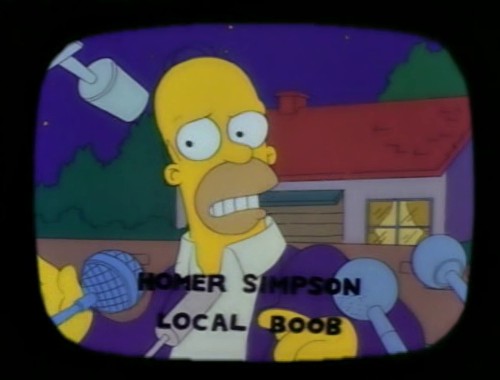 Plot: While Homer & Marge have a fancy night out to reconcile, the kids are left with Ms Botz…a robber called the Babysitter Bandit.

Thoughts on the show:
• Some Enchanted Evening was supposed to be the first Simpsons episode, but major problems with animation caused it to be pushed back to the season finale. That’s why the couch gag has no gag – every episode afterwards was supposed to be a play on this one. 70% of the animation was redone, meaning you get a mix of more refined character drawings of later in the season, mixed with zany charicature facial expressions and older character designs of the Tracy Ullman shorts (e.g. Barney has his skin-coloured hair instead of brown hair again). The dialogue wasn’t re-recorded so even though Homer mostly looks ‘current’, his voice is sometimes almost unrecognisable.
• Arnie Pie (in the sky) is called Bill Pie
• Marge feeds her children doughnuts for breakfast?
• She rings a relationship therapist radio show, giving her name and age (34). Combined with it being a local show, and with her characteristic gravelly voice, who ISN’T going to figure who this is? (A moot point as she names Homer, or “Pedro”!) She must’ve been at the end of her tether to speak to someone and let the whole city know.
• In this poorly-animated episode, there’s an even poorer animated show on TV (the happy little elves with 1 frame per second!). Hilarious.
• It’s nice to see some family bonding – Lisa and Bart keep Marge and Homer company while getting ready.
• Bart’s prank names to Moe’ Tavern: Al coholic and Oliver Clothesoff. A running gag you can only use about 10 times before running out of names.
• As with earlier episodes, Bart is the featured as the marketable one – the catchphrase-slinging mischevious kid.
• His plan to incapacitate Ms Botz by hiding above a cabinet with a bowling ball was almost perfect – if successful he probably would’ve killed her though!
• The kids escape their ties and devise a plan to KO Ms Botz. Feels very Home Alone, kids capturing a robber in their house with their parents out.
• On-screen title when Homer’s on the news “Homer Simpson, local boob”. Brilliant.

The writing showing a disfunctional but loving family approach has always been there:
Homer: Lord help me, I’m just not that bright.
Marge: If you raise 3 children who can knock out and hogtie a perfect stranger you must be doing something right.

Overall: It’s a shock to the system going back to what is essentially “Pre-Simpsons” Simpsons. The story is immediate and ‘action’ driven – dealing with the robber in their house, so it’s not that remarkable. Introduction of Ms Botz, capture, escape, and aftermath all within 12 minutes. Wouldn’t recommend.