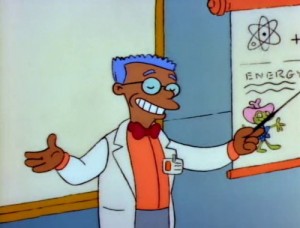 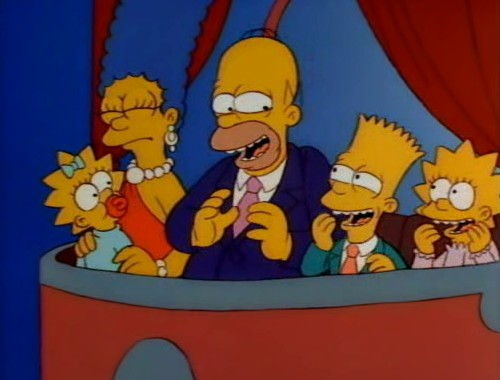 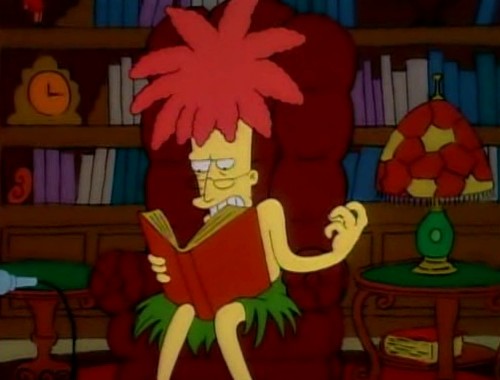 Thoughts on the Season:
• The stories have a strong moral core, as opposed to just comedy – the over-arching message through the Simpsons is that although they’re a dysfunctional family, they love each other, and it’s family that keeps them together. This means the bulk of episodes are more interesting than funny, but always well-written.
• Most of the episodes have only one plot per show – meaning 22 minutes is dedicated to fleshing out a storyline, which is really refreshing.
• Half of the season is ‘Pre-Production’ Simpsons, where the actors haven’t settled on a voice, and the animation is much rougher and cartoony, with charicature expressions and Hanna-Barbara sounds (Marge snarling with a lion roar sound, slamming the door makes a funny wobbly cartoony sound). Other early animation gafs/choices like Black Smithers, Barney having yellow hair, Moe black hair etc are present.
• Many storylines are about Homer providing for his family, either to provide a Christmas good enough for them, trying to better them (No Disgrace Like Home), considers suicide after being unable to provide for them, or making sure his kids learn lessons (treat women with respect)
• Bart is positioned as the most marketable: the catchphrase-spouting mischevous kid. (especially in Call of the Simpsons). Even though Homer is by far the funniest member of the family, and as an adult, isn’t impeded storyline-wise.
• They repeat couch gags, and are very simple (the show going another 400+ episodes means it’d have to get bigger and bigger)

Best episode: Krusty Gets Busted. The introduction to the show-stealing SideShow Bob, with some fun sleuthing in an experty-crafted episode.
Worst episode: Moaning Lisa. Miss “Answer to a Question nobody ever asked” is sad, and she doesn’t know why. Cue Jazz songs and watching her mope around.

There’s No Disgrace Like Home:
Homer (at Moe’s bar) “My mom once said something that really stuck with me. She said “Homer, you’re a big disappointment”. God bless her soul, she was really onto something.”

Lisa “You’re sending us a psychiatrist who advertises on *Pro-Wrestling*?”
Homer “Boxing, Lisa, boxing. There’s a world of difference.”

Bart The General:
Homer (to Grampa up in the treehouse) “You! Up in the tree! The tall, grey-haired kid. Get your butt down here right now!”

Life on the Fast Lane:
Bart “Once you gave me advice that really helped”
Homer “I gave you advice? Get outta here.”
Bart “If something’s wrong and you’re too dumb to know better, keep your fool mouth shut, so you can’t make things worse.”
Homer “Hmm. Good advice.”

Homer lamentingly points out his house from Barney’s window, saying its the brightest as someone left the porch light on.
Barney (ringing Marge & chastising her) “You left your damn porch light on! Homer’s not made of money!” AMAZING.

Some Enchanted Evening:
Dr. Marvin Monroe: I’m as sure of it as I’m sure my voice is annoying.

The Crepes of Wrath:
Skinner: He’ll be Albanian.
Homer: You mean all white with pink eyes?

Krusty Gets Busted:
Sideshow Bob (on a riff of Krusty’s opening catchphrase): WHOM do you love?

Overall: Should you watch it? Only for historical reasons. Although it has it’s positives, it hasn’t quite come together. Always well-written but this (and nothing else on television) can’t measure up to some seasons that follow.

Hope you enjoyed my recap of the Season! Lemme know if you’re interested in seeing me tackle more 🙂