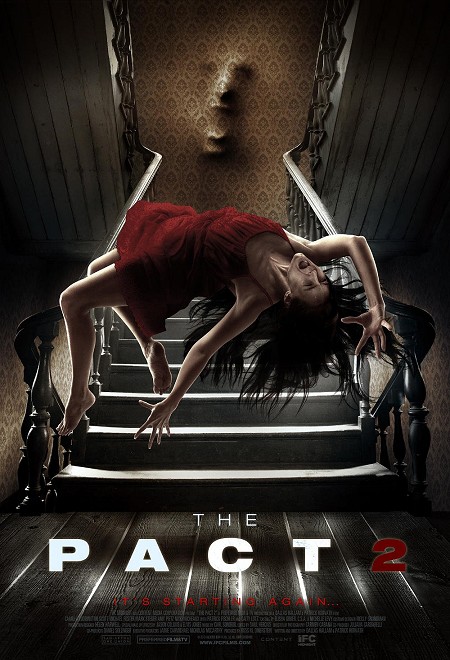 Ah jaysus, that poster looks more expensive than the original, but cheaper at the same time. D’oh!

***This review contains some Pact 1 spoilers***

What you should know from Pact 1: Annie believes her family home to be haunted, so she gets her psychic friend Stevie to help out. Her uncle is the Judas killer, and with help from a ghost of a deceased victim (Jennifer Glick), she puts a bullet in Judas’ head and escapes. The last shot shows Judas’ eyes opening.

Cast/Crew: I must mention that Caity Lotz (Annie) is given top billing, despite her having what amounts to an extended cameo. Perhaps it’s a shady marketing tactic as she landed a recurring role in TV show Arrow (as Sara Lance). The film mainly features Camilla Luddington as June Abbot, a daughter of a Judas Killer victim as mentioned above.

Plot: June experiences unsettling events in her house. She comes to believe she’s being haunted by the (supposedly deceased) serial killer, Judas, whilst a copycat killer is on the loose.

Thoughts :
• June experiences horrible visions/nightmares relating to victims of Judas, and wakes up in odd places (eg bathroom, car) with a knife in her hand. I thought this was a nice plot-swerve. She draws these vivid nightmares as a hobby.
• She lives with her boyfriend who is oblivious to these events as he’s a policeman who works overnight.
• This film has flashbacks making you feel bad, like you really missed out if you didn’t see the previous film. However they’re actually only relevant to this film – there’s not much you need to know, as seen from above.
• We’ll get this out of the way, as there are positives. I have two big gripes with this film:
1) Once again, what is this pact? It’s not explained in the film.
2) June is depicted as a cleaner for crime scenes. She asks her boyfriend to “put in a good word for her” so she can work this new crime scene. This is COMPLETE BULLSHIT. Biohazard remediation is a industry job, not fucking freelance. There’s a TEAM of people with specialised equipment, not some weirdo with a sponge and a bucket. WTF! It’s completely wrong here (just to serve a plot point) and pissed me off.
• OK! Good things – right off the bat, you can see a much bigger budget, the film looks nice, not shot in one empty, shithole apartment.
• The music and editing is much improved. Annie is even prettier.
• Hallmarks of the Judas Killer haunting is lights being affected/blowing out, electronics turning on (especially TV/record player), decapitations. There’s a cool scene where June’s in bed and she sees a lampshade silhouette of a humanoid shape that disappears, comes back and starts moving. I thought it was great.
• I enjoyed the one semi-4th wall nod; when something is creepily foreboding, Annie says “Goddammit, I hate this shit”.
• Much like in the first film, there’s a question mark over whether Judas is real or a ghost, and if the ghost/who’s haunting you is good or malevolent. Good stuff.
• Jazz-type music instruments cacophany go off when ghost/killers are making themselves known. Is a bit iffy but it’s fine.
• June’s Pink room investigation was absolutely useless. The plot happens without anything gained. Perhaps it’s to make the big finale obvious but it wasn’t needed.
• I was initially annoyed that when June just sees these horrible visions, she doesn’t bolt. She later calmly explains (thank you) that whatever it is, it’s attached to her, so running away won’t help anything. She won’t tell her boyfriend as he won’t believe her. I always appreciate a film addressing these basic logical questions.
• The other main player in the film is FBI Agent Ballard, who is a profiler. He’s a cold and blunt, almost to the level of condescension. He cannot feign sincere politeness and it’s obvious that his questions are intentionally leading. June and her boyfriend are relatively nice to him. It’s the wrong type of heat for me (I didn’t want to see/deal with him) but it does play into the ending sequence so in that respect it works.
• The ending sequence/revelation/how it plays out is a lot of fun but the epilogue/final scene is a groaning “see you next time…in PACT 3!”

Overall: A better film in every respect than the first: the acting, budget, music, editing, story. However most people seemed to really like the original and not really this one. If you’re thinking of seeing it, watch both and let me know! A good (but not stand-alone) film.