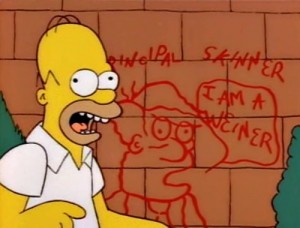 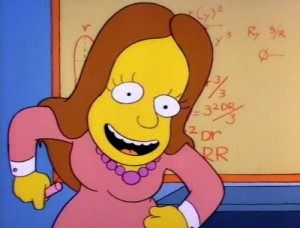 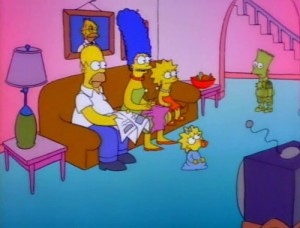 Season 1, Episode 2
Original Air Date: January 14, 1990
1st ever Chalkboard gag: I will not waste chalk
1st ever Couch gag: Bart gets squeezed up & off the couch, and falls in front of the TV.

Plot: Bart cheats on his aptitute test, sending him to the gifted class. He keeps up the pretense but finds himself in over his head, mocked by his new peers and ostracised by his friends, until he comes clean.

Thoughts:
• We get a look at the classic, original opening. Springfield Elementary’s purple, Lenny is bald with a bow tie!
• Our favourite family plays scrabble. Hilariously all of the words are 3 letters long. (“Fat”, Arm”)
• Backgrounds are blurred, blended colours (instead of a picture of sky with clouds). It’s like someone messed with the hue – Skinner’s wearing a pink to purple jacket.
• Martin’s IQ is 216, which is incredible. Lisa’s is 156 (or 159 depending on the episode). It makes me feel bad because of the mix up, he has to stay in Bart’s class. Wouldn’t be surprised as the board member uses phrenology (“it was dismissed as quackery 200 years ago”) to measure Bart’s head. Wouldn’t Martin’s parents be horrified of their son’s score and demand a re-testing?
• When they found out Bart’s a genius, both parents have different approaches to it. Homer wants to maintain the status quo (keep eating Krusty-Os) whilst Marge wants to nurture his creativity going to a play. Bart and Homer, bored out of their tree, provide their own entertainment. Lovely to see Lisa having a laugh as well and not being such a sourpuss.
• We see that Bart’s not all that bad (he switches his paper with Martin, who both taddled on him, and purposely antagonises him) and sounds sincere when he comes clean to Homer, mentioning their extra time spent together.
• r2dr is rrdr, not rdrr – you’d still have to rearrange it to make that shit joke!
• Homer cleans Bart using turpentine (which is horrendous!)
• Marge nonchalantly brushes off Bart not being smart, which is funny and a quite nice sentiment.

Notable quotables:
• Homer pushes Krusty-Os on Lisa “We could have two geniuses, just in case Bart’s brain explodes.”
• Homer “We can get some Frosty Chocolate Milkshakes!”

Overall: More interesting than funny but great as a character-building episode.

The Simpsons Roasting on an Open Fire